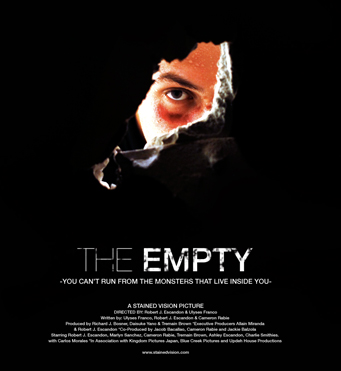 Ark, a man destroyed by the death of his wife finds refuge in a crumbling apartment building where he tries to forget and rebuild his life. Not able to sleep and haunted by the memories of his dead wife, Lilly, Ark begins a delusional trip through the everyday that takes him to the very edge of insanity, wheres dreams are reality. Finding that his dreams can actually hurt him, Ark is encouraged to visit the buildings voodoo doctor by his video game playing neighbor, Shaka. Upon visiting Amadi, the voodoo doctor, Ark begins his downward spiral into a void where all of his darkest fears become real. Now, Ark must find a way to kill his nightmares and return his life to normal before his nightmares kill him.

The screener of The Empty begins with a plea to the viewer to “adjust your TV so black is black.” Once the movie begins, the reasoning behind the request is obvious: the picture is oversaturated and high with contest. This actually works rather well in enhancing the surreality of the dream sequences, but it does nothing to help the film otherwise.

There is also a cheesy warning that states that states that a portion of people may experience seizures or loss of consciousness when viewing certain images and to consult a physician before watching the film. Lastly, there is a simple quote: “Life is but a dream.” Unfortunately, it’s all downhill following the intriguing text introductions.

We are immediately introduced to Ark (Robert J. Escandon) and experience his problem firsthand; he suffers from vivid, disturbing nightmares of his deceased wife, Lilly (Marlyn Sanchez), in which she abuses, tortures and kills him. The line between dreams and reality becomes increasingly blurred, impacting his life awake as much as when he’s asleep. Unable to find solace on his own, Ark seeks the help the the bizarre resident witch doctor, Amadi (Tremain Brown), to help protect him from his dreams. However, this sets off a series of events that only make matters worse for Ark.

Conceptually, The Empty is something like Eraserhead meets A Nightmare on Elm Street. In terms of execution, however, they would never be uttered in the same breath. It uses the “psychological horror” tag as a means for excessive sequences of random weirdness. However, the picture is hardly psychological, nor is it scary.

Living up to its title, nearly every aspect of The Empty screams “amateur.” It’s a slow-moving script with unnaturally dialogue spouted by inexperienced actors portraying unlikeable characters. It feels like a group of pretentious film school students borrowed some equipment and played around with various techniques in their apartment building and called it experimental.

Perhaps the worst aspect of the film is the character of Vince (Charlie Smithies). He’s Ark’s impossibly annoying, f-bomb slinging landlord who appears on screen far too often, only to hound his residents for his “f*ckin’ rent.” He’s not just irritating in the I-can’t-wait-to-see-him-get-what’s-coming-to-him way, but rather in the I-can’t-wait-for-this-movie-to-be-over-so-I-never-have-to-see-him-again manner. To make matters worse, his comeuppance never comes.

Robert J. Escandon embodies the phrase “jack of all trades, master of none.” In addition to co-directing the film with Ulises Franco and co-writing the script with Franco and Cameron Rabie, he also stars as Ark and served as editor, sound editor and executive producer. While he is relatively competent with each of these departments (despite having almost no credits in any of the fields beforehand), he seems to have spread himself a bit too thin. Between this and the overall feel of inexperience, The Empty fails to exhibit much potential. 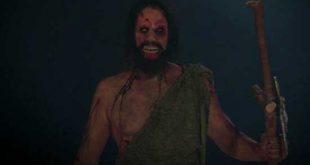