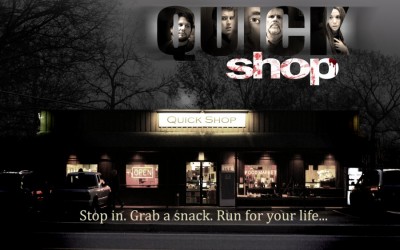 Hunter and Trevor are new roommates at college. After a falling out over a girl, Trevor talks Hunter into going to his hometown for a weekend in the country. Things take a turn for the worse when they stop at a Quick Shop to go to the bathroom, and proceed to get locked in the store and stalked by the shopkeeper.

Quick thrills come in all shapes and sizes; “Quick Shop” is one such short which leverages humor with terror. Our female opener has found herself in a bad situation. It seems an unwanted former has decided to pay her a visit and this time he plans on making an impact. While she hides within her closet, she doesn’t expect what is going to happen next. Though as we find in this opener and within the plotline itself, all is not how it seems.

Hunter and Trevor, 2 college bud,s are off to see the country after Trevor talks his friend into going on a road trip. As expected there is a girl involved who they have a slight disagreement over, but on the level things seem ok. The 2 ride off into the night and midway decide to stop by the local “quick shop”. But as we find, things are a bit different in the outskirts as Hunter has an expected bothersome store owner sneaking around and stirring up things a bit. Trevor decides it time to throw down the law as he tells the owner off and stands up for his right as a customer.

When they discover the doors have been locked, it gets a bit tense for comfort.

Martin Binder provides us with a nice little short that succeeds in a combining a firm helping of humor and terror. Much in the tradition of anthology shorts like  “Tales from the Crypt” with the humor of “Tucker and Dale”, QuickShop rushes by quickly but does so in an effective manner. Conceptually it’s nice to see a full circle resolve that ties all the elements together. There is a hint of classic inspiration here that  reminds me of stories from earlier times (when anthologies were still good)

This film is being played at film fests and most likely will be one to remember from the collective. Stevens and Hercik have a great on screen chemistry that makes the piece work leading up to its finale. There are some great works coming out of the short sector, and QuickShop is definitely one of them.