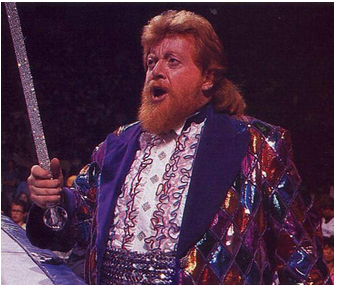 Mike Joy:  Horrornews welcomes Sir Oliver Humperdink.  The question is why are we interviewing this famous pro wrestling manager about horror. The answer is simple, you’ve seen House of 1,000 Corpses, House of the Dead, House of Wax, and even House on Haunted Hill, but have you ever seen House of Humperdink?  Sir Oliver Humperdink throughout his storied career as pro wrestling manager, he’s managed the likes of Abdullah the Butcher, King Kong Bruiser Brody, Lord Humongous, Ox Baker, One Man Gang, Gamesmaster Kevin Sullivan, and The Beast from the East – Bam Bam Bigalow.  This motley crew of talent would make most horror movies look like Disney.

You’ve managed many a heel or bad guy in the scope of the professional wrestling, but do you have any favorite villain or monsters from horror cinema?

Sir Oliver Humperdink:  I love all the old Universal flick’s from the 30’s!  Frankenstein, Dracula etc.  If I had to pick one, it would be Bela Lugosi’s “Dracula”.

Mike Joy:  Who was the most out of control, craziest wrestler that you’ve ever managed and maybe you could follow that up with a brief example as to why?

Sir Oliver Humperdink:  Would probably have to go with Eddie Farhat, the Original Sheik from Detroit.  Every match with him was like a thrill ride for me.  You know, just buckle up and hang on!  He’d be everywhere you could imagine.  Up in the stands chasing people.  One night in Amarillo, Tx. he chased a bunch of rough West Texas cowboy’s out of an entire section.  It was wild!  Would have to add Abdulla the Butcher in there too.  And Bruise Brody!  I always loved the “wild men”!!!

Mike Joy:  In the days of territories, what was your favorite territory to work?

Sir Oliver Humperdink:  Florida I would have to say, but I had really good times wherever I happened to be working.  Los Angeles was great, loved Louisiana and had great times in the Carolina’s.  But I always went back to Florida.  What’s not to like? 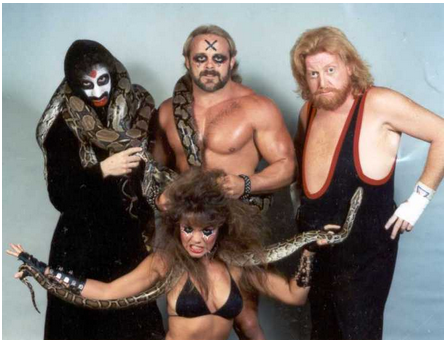 Mike Joy:  I’ve been a horror fan and a wrestling fan for just about as long as I can remember.  They both have lots of similarities, I’ve seen many matches that ended in bloodbaths, much like horror.   What is your opinion on the gore that’s related to pro wrestling?

Sir Oliver Humperdink:  If used properly and at the right time, it is a tremondous way to accent a fued/rivalry.  If used too much, it just becomes another “Ho-Hum” moment.

Mike Joy:  When talking about weapons in wrestling, the fork of Abdullah the Butcher can not be ignored.  What is your weapon of choice sir?

Sir Oliver Humperdink: I have always had a marked proclivity for the old fashioned set of knucks.  But I have also been associated with the “spike”.  Oh, which to choose?  How about we go with the spike?

Mike Joy:  Horror films sometimes have roots in real tragedy, especially movies that focus of serial killers or famous murders.  At the end of those movies, the Hannibal Lectors of the world get away to kill again another day.  I’d like to say that it only happens in the movies, but in the case of the murder of Bruiser Brody, it’s an all too familiar reality. Would you care to offer you opinion on Bruiser Brody and his murder?

Sir Oliver Humperdink: Well of course, I was as dumbstruck as anyone else when I heard the news.  As far as Frank goes, he was always a wonderful guy to me and I really appreciated that. Everyone has different experiences and opinions of their time with him, but to me he was always easy to work with and it was my pleasure to do so.  The killer will have to pay his dues when the time comes.

Mike Joy:  What do you think of Vince McMahan and how he changed the sport?

Sir Oliver Humperdink: I have no problem at all with Mr. McMahon.  He treated me well when I work for him, and that’s all I judge people by.  The fact that he is so sucessful speaks for itself.  Would I maybe have done something different with my character there?  Absolutely. Am I sorry I went there?  No way!  Even on the odd times I meet him today, it’s very cordial.

Mike Joy:  Do you currently watch any of the wrestling product out there right now?

Sir Oliver Humperdink: Yes I watch RAW occasionally, and SmackDown.  Being in the biz is like being bitten by Dracula. There’s no getting the biz out of your blood!!

Mike Joy:  What wrestlers of today’s era would benefit from the managerial skills of Sir Oliver Humperdink?

Sir Oliver Humperdink: Well, they are such great athletes today!  I would think I’d fit with Shamous, the Great Kahli and I would really like to have been able to work with Randy Orton.

Mike Joy:  Wrestlers have been merged with horror and science fiction films for decades, Ox Baker in Escape from New York, Roddy Piper in They Live, or George Steele in Ed Wood.  There’s a long list.   I’m sure you’ve seen a few through the years.   Do you have a favorite genre movie from the past or present?

Mike Joy: I would like to close by saying that it’s been my honor to interview you and I hope you all the health and happiness.

Sir Oliver Humperdink: Mike, the pleasure has been all mine!!  Thanks for the opportunity to talk wrestling and horror