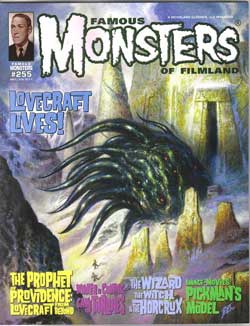 By the look of this cover, it appears that FM has taken a special interest in all things LoveCraft. Those tentacled beasts, those brooding stories that creep into your skin like black ink permeating directly to your soul. Yes, it’s an issue dedicated to the works of H.P. Lovecraft, so hang on for the journey.

“The Re-making of Thriller” recounts the efforts that went into the special redux planning of reviving the classic monster movie music video. With a top team of effects artist on board, this article details a bit of the energy and passion the crew has while working on one of their early inspirations. This event featured a visit by Michael Jackson himself 2 weeks prior to his demise. The reels were locked down and it was looking like the reboot version would never see the light. Though as we find, word came thru to release them with the release of “This is it” so the world can experience a bit of magic one more tie.

Harry Potter is closing down its operation with the release of its final film. This article actually proceeds the release by a few weeks with much of the storyline kept still in secrecy. It’s still a great tribute to the work and minds behind the final installment. The effect shop details its final days as the remaining pieces are carted away to be showcased in museum showings across the country.

“Pickmans Model” is a small photo illustration piece based on the haunting Lovecraft story. For those who are unfamiliar with the work, it involves a painter who paints such dreadful images that they seem almost supernatural in origin. It’s a study of death and the monsters that bloom from within.

“Prophet of Horror” presents a great overview on the history of H.P LoveCraft. The multi page article is adorned with beautiful imagery by Bob Eggleton which is envisioned with stark images painted in a variety of compositions featuring the Cthulhu mythos character.The article presents Lovecraft as he was, a struggling  author who actually went thru most of his life in poverty. We are told about his stories which most likely would have never seen the light of day if not for a resurgence years later by a colleague. HP was an inspiration to many in word, who seemed to have a dark connection with the underworld thru way of words of paper. His legacy has gone on to inspire centuries later, though is life would never get the chance to experience that fact.

The issue continues in this vein with various smaller features on Lovecraft’s work. One film in particularly was a little ditty called “The Call of Chtulhu”. There is some great art work and some tasty little features that fans of HP will want to pick this one up.

A nice change of pace from the typical movie of the month magazines, FM has created a keeper issue with some great keepsake reading. 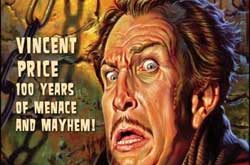