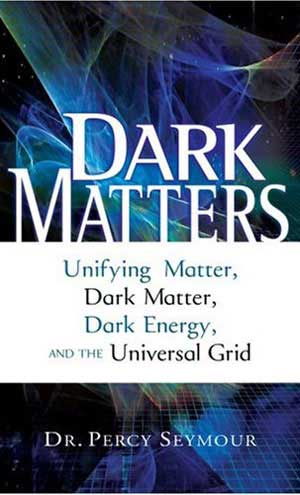 Dark Matters is an intense book of science. Author Dr. Percy Seymour has laid out a road map to further explorations into understanding the tapestry of the universe. As it’s mentioned in summary, dark matter and dark energy are in relation to the important unsolved problems of physics, astronomy and cosmology. The take presented here is that the universe as a whole is seen as a tapestry. There is also much going on that is invisible to most. These elements unseen make up the dark matters discussed. They also represent 95% of the universe, which accounts for in crease in fascination among scientific communities.

When I took upon delving into this book, the ideas of dark matter, dark energy and universal grids were appealing to me. However, I must confess the material is a bit deeper than my untuned science interest mind can take in one reading. So I caution readers to allow for a period of deep concentration.

There are may theories, laws, history and discoveries commented on and explained within. Percy breaks down the study of atoms and the forces of the universe. These include electromagnetic, gravitation, and strong and weak nuclear forces. In fact, the first section of the book provides a pretty solid overview on magnetic fields, including the magnetic mapping of the planets.Of course this set up helps to move you more into intensely involved subjects.

Chapters and sections are devoted to explanation on the “Dopple Effect, the relationship of electricity and magnetism, Keppler’s Laws, magnetic fields in pulsars, stars and x-rays, solar activities, and models of different cycles. It doesn’t stop there. You are more or less given the universe in a nutshell. We are also brought up to speed on recent discoveries and theories on the subject of dark matter and its play on the universe. It’s evidence is presented through gravitation lensing, hot gas, and clusters.

This sets the ground for some of Seymour’s theories. Some theories being that of plasma space and its Alfven waves exceeding the speed of light. Many cosmic mysteries are tapped into over the the frontiers of physics .Though without delving too far into the mass arena that is covered here, just know you are in for an intense ride. Relativity, quantum theories., The Bohr Atom, quantum mechanics, mathematical models and particle interactions ….these are all areas that will require a deeper understanding to grasp there nature and to appreciate the material.

Now if your reading this review, your first thought might be horror does a book like this have anything to do with horror fiction and films?. Good question….. the approach is more to the left field in the ways of thinking. For instance, quantum physics, dark energy, electromagnetism all have interwoven workings with the supernatural. It just on a more scientific, direct approach to something more abstract. The laws and theories presented are a culmination of research and deep studies that have spanned our history. Einstein is still mentioned to this day as one of the strongest contributors to this field., Though the future is here and now. Basic principals and understanding them will lead to further answers about the unknown.

The truth is our universe is darker and more abstract than anything we can perceive, this is why I encourage reads such as these to peak your curiously with new perspectives and groundwork presented in books. Mr. Seymour is a brilliant researcher and writer that may engage readers with many new ideas to look into. More educated scientific minds will find fascination in Seymour’s magnetic field research and a forum for debate among scientific circles.

Check out other books such as these at: New Page Books