The 2012 Core Set features 249 different, black-bordered cards. The 2012 Core Set continues a Magic the Gathering tradition of releasing an annual set that is not tied into a certain block and features many classic cards as well as a lot of brand new cards. Some of the returning cards in the 2012 Core Set include the planeswalkers Chandra, The Firebrand, Garruk, Primal Hunter, Gideon Jura, Jace, Memory Adept and Sorin Markov, all of whom can be seen on the 2012 Core Set booster box art.

While there are no new card rules in the 2012 Core Set, there are a couple of new terminology Magic the Gathering players should become familiar with. The word “Hexproof” has been added to cards in place of “This creature can’t be the target of spells or abilities your opponent controls.” Also, “Dies” will replace the phrase “is put into a graveyard from the battlefield” in the Magic the Gathering universe.

There are a few other brand-new cards that stuck out to me in the 2012 Core Set. Swiftfoot Boots was the first to do so. Swiftboot Boots is an equipment that costs 2 colorless mana to cast and 1 colorless mana to equip. Swiftfoot Boots gives the equipped creature Haste and Hexproof. Think Lightning Greaves, but it gives creatures Hexproof instead of Shroud, and Swiftfoot Boots, like Lightning Greaves, is also an uncommon. Adaptive Automaton is another card that I really like from the 2012 Core Set. Adaptive Automaton casts for 4 colorless mana, and it is a 2/2 colorless artifact Construct creature. You choose a creature type as Adaptive Automaton enters the battlefield, and he becomes that creature type in addition to its other creature types. Then, Adaptive Automaton gives creatures you control of the chosen type +1/+1. Basically, since Adaptive Automaton is colorless, you could throw this guy into a specific creature deck (elves, vampires, myr, etc.) for an instant boost. Bloodlord of Vaasgoth is maybe my favorite card in the 2012 core set. This black Vampire is a 3/3 Flying creature with Bloodthirst 3, and, if that wasn’t enough reason to add him to your Vampire deck, he also gives all Vampire creatures you cast Bloodthirst 3. Bloodlord of Vaasgoth only costs 3 colorless and 2 black mana to cast to put the icing on the cake; he is yet another awesome Vampire to add to the long list of powerful ones. Imagine a creature card that costs 2 colorless mana and 2 white mana to cast, and the creature is a 4/4 with Flying, First Strike and an Angel. That alone would be a rare, but make that card an enchantment that does all of those things plus returns to your hand when enchanted creature dies, and you have a really powerful mythic rare card from the 2012 Core Set called Angelic Destiny. Throw this bad boy on any creature or token you control, and you have an instant creature of mass destruction.

The 2012 Core Set contains 5 new intro packs: Sacred Assault, Mystical Might, Grab for Power, Blood and Fire and Entangling Webs. Sacred Assault is a pretty balanced creature deck made up of white and green spells. Sacred Assault’s goal is to summon creatures with a variety of abilities, such as Flying, Hexproof and Vigilance, and then pump them up with enchantments. Aegis Angel is the holographic in this deck, and it casts for 4 colorless mana and 2 white mana. Aegis Angel is a Flying 5/5 Angel that makes target permanent Indestructible for as long as you control Aegis Angel. Sacred Assault is a pretty good deck; it has a nice mix of creatures and some really nice enchantments that make those creatures even better.

Mystical Might is a blue and white deck designed to defeat your opponent with a mix of powerful Illusion creatures and spells that will stall and confound your opponent’s progress. There are some other good creatures in Mystical Might, in addition to the Illusions, such as the holographic Sphinx of Uthuun. Sphinx of Uthuun is a Flying 5/6 Sphinx that cast for 5 colorless mana and 2 blue mana that allows you to add some of the top 5 cards from the top of your library to your hand when he enters the battlefield. Mystical Might is a very average deck, and I think the real reason you would purchase this one is to get the Illusions and Lord of the Unreal, who gives Illusions you control Hexproof and +1/+1.

Grab for Power’s goal is for you to play all 3 of the new artifacts: Crown of Empires, Scepter of Empires and Throne of Empires. When these 3 artifacts are all under your control at once, they become very powerful and can end your opponent fairly quickly. There are a variety of cards in the black and blue Grab for Power deck that help you find these 3 in your library including the holographic Rune-Scarred Demon. Rune-Scarred Demon is a 6/6 Flying Demon that casts for 5 colorless mana and 2 black mana. You may also search your library for a card, and put that card into your hand when Rune-Scarred Demon enters the battlefield. Although Rune-Scarred Demon has a high mana cost, he is still my favorite holographic in the 2012 Core Set intro packs, and he alone is reason enough to make Grab for Power the best deck in the 2012 Core Set.

Entangling Webs is the last of the 2012 Core Set intro packs, but it too is one of the best decks, and it would be really fun to play with as well. Entangling Webs is a green and red deck, and, like most green decks, its main goal is to simply defeat your opponent with brute force. There are many powerful creatures, equipments to make them stronger and spells to give them even bigger boosts temporarily in Entagling Webs, but the real threat here is the Spiders. The holographic in Entangling Webs is a 5/7 Spider with Reach named Arachnus Spinner. Arachnus Spinner casts for 5 colorless mana and 1 green mana, and his ability allows you to tap an untapped spider you control to play an Arachnus Web from your library or graveyard. Arachnus Web is an enchantment that equips to an opponent’s creature to make the creature not be allowed to attack, block or use an activated ability. Arachnus Web will be destroyed at the end step if the enchanted creature has power 4 or greater, but you can easily see why this combo would put an opponent in a sticky situation. Entangling Webs is a really nice deck that would be difficult for any other deck to defeat.

The 2012 Core Set is a wonderful expansion with many powerful cards contained within it. Most of the intro packs are pretty good decks right out of the box, and there are plenty of great singles to be attained through booster packs and the like. Magic the Gathering veterans will enjoy this set, and it’s a great set for beginners to learn to play with as well. 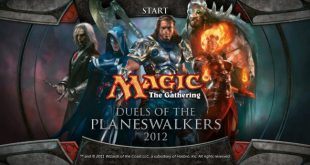 Game Review: Magic: The Gathering — Duels of the Planeswalkers 2012