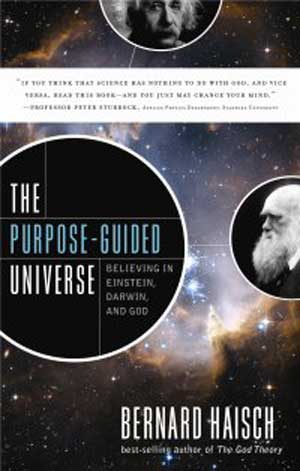 If anything is evident in modern culture, it’s that the discussions of God, science, Darwin and the meaning of life have risen to the forefront. This aspect has found it’s way into authors, films, and heavy radio discussion that all seem to root back to a basic premise. Where did we come from and what is our purpose? Is there an intelligent design orchestrating this all with the wave of a celestial wand or was the minions of lives that have lived just an extinction of 1 single higher being who wanted to experience all that there was from a multi perspective?

The book “The Purpose-Guided Universe: Believing In Einstein, Darwin, and God” and it’s author of course can’t answer these questions with certainly without being the creator himself, but he does raise the questions and the facts to the surface that may help us all understand with a tiny bit more clarity in what it all means. The book takes a middle ground by not adhering directly to religion or the absence of it for that matter. The multiple ways of thinking and questions asked are visited with great insight and philosophical concern. In fact, what I found most interesting in it’s first chapters was the way he addresses a few new ideas of existence, the scientific relationship and our existence as human brings.

String theory, ….in its elaborate mysticism buried in mathematics that alot of physicists can’t make heads or tails of….. seems to somehow always make it way back into these discussions. Bernard Haisch approaches what is and what could be in an effort to make sense of the ultimate grand illusion. Broken down theories that seem to break down into puzzles questioning the very fabric of all and how it originated is a common thread. It’s an intriguing study that is still very accessible to readers of new science and new age. Bernard Haisch is able to take such complexity and spell it out in a way that we can consume in one reading. Will this book and others like it enlighten our search for why and how…… or will it further confuse our delicate unprogressed minds into madness that seeks sustenance?

Later chapters begin to dig deeper into the quantum side of things. The density of matter, gravitational forces, carbon, oxygen, dark matter and general theories of the universe. It’s good for a once over if your aren’t a science major, though for readers who just like the philosophical angle…you may want to skip over these sections and come back later. It’s certainly all relative and important..it’s just a bit deeper to consume.

I found some real compelling arguments for and against a God as a supreme being to us. The book invites these discussions and in many respects still is able to stay neutral. I found the bible quotes compelling in which paint GOD as a madman. Not being a Bible scholar these quotes really hit a valid point. I’m not agreeing, just pointing out there peculiarity.

Interesting arguments are made such as the nature of religion which asks a simple question that how can there be a God if so many religions differ in their ideas, rules and beliefs of what is? Who’s to say which is the definitive one and which is the false? Or maybe this need for a God is simply a shared instinct that feeds a much bigger picture that is beyond our comprehension. The book is a marvel with its ability to cover so much in a comprehensive way. Of course each of these subject matters deserve their own study, but it does act as a friendly philosophical thinking mans guide.

If you like this train of thinking, then this certainly needs to be a book taking space on your shelf. It’s the work of great thinkers that fuel great thought. Bernard Haisch is happy to oblige. Pick one up now.