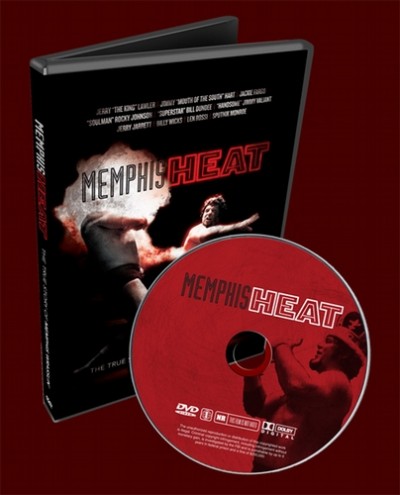 Order it here TODAY and you will be the first on your block to get it. By ordering direct now from the film production company, you will also receive a too-cool Sputnik Monroe sticker for your iPad, skateboard, station wagon, or bobsled.

This will be the greatest Christmas present anyone ever received since the invention of Christmas!!

About Memphis Heat: The True Story of Memphis Wrasslin’:

Memphis Heat documents the wild and wooly history of Memphis and Mid-South professional wrestling. From the carnival days of cult hero Sputnik Monroe – the heel who integrated the Memphis wrestling audience before the Civil Rights movement – to masked men, midgets, tag teams, female wrestlers, and the rise of bad-guy heel Jerry “the King” Lawler and Jimmy “Mouth of the South” Hart in the 1970s, Memphis Heat delves into a time-forgotten, pre-cable TV world where almost anything happened inside and outside of the wrestling ring and no holds were barred!

Don’t take our word for it! Listen to the critics who have spoken!

“Memphis Heat is entertaining from the 1st bell to the last.”

“Anyone who enjoys campy shtick, outrageous personalities, and absurd theatrics–in other words, anyone worth knowing–should be heartily amused.”

These prices are for US and Canada shipping only. For international shipping prices please email us directly at order@memphis-heat.com.