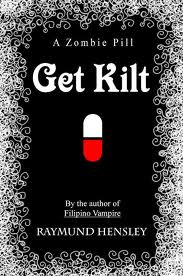 The basic premise behind Raymund Hensley’s Get Kilt is not an unfamiliar one: Scientist tries to improve upon natural processes of life, “improvement” backfires and creates zombies, gory chaos ensues. Before your “been there, done that” reflex kicks in, though, let me assure you that you’ve certainly never been anywhere quite like the place where Hensley’s weird wild ride of a short novel will take you.

This take on the zombie genre plays out as if you’re reading it through bizarre-o-vision goggles. The hottest new trend in energy supplements is Kilt, an enormous pill not intended for “children 79 or younger.” The over-80 crowd gleefully gobble down the pills and find themselves filled with renewed vigor—more so than in their lost youth. Much much more so. In fact, the pills endow the elderly with superhuman strength, leading a newscaster to dub them the “supelderly.” Unfortunately, the supelderly happen to be much more dead than their spritely antics would lead you to believe. And they have a nasty tendency to dismember any non-supelderly with whom they come in contact.

The tale really begins with Janice Altair, a veritable youngster among her peers, at a very spry 80. Despite keeping herself in good shape, both physically and mentally, Janice starts the novel by being checked into a nursing home, where she strikes up a rather—ahem—intimate relationship with a resident named Jackson Coontang. It quickly becomes apparent that 90-year-old Pepper Ann—a reputed witch—is jealous of these developments. Before long, the Kilt hits the fan and supelderly are running around killing and maiming with youthful vigor. I won’t spoil the plot twists and turns, but I will say that they happen with refreshing rapidity. One of the reasons the book is so short is that events happen quickly. Hensley gets things done and doesn’t throw in a bunch of unnecessary gristle to space out the juicy bites he offers.

If Get Kilt weren’t so twisted and gory, I’d be tempted to classify its tone as whimsical. But all things continued, I’d say it more closely resembles whimsical’s older, darker brother. The one who’s done a lot of drugs and spends much of his time making strange noises in the basement. There is certainly a good dose of playfulness present … even if the play at times takes the form of jumping rope with human intestines. We’re talking about zombies here, guys. What did you expect? A nice polite chess match?

The one thing I feel Get Kilt is missing is a really thorough edit. The narrative voice is divided up among the main characters, who are all ordinary everyday folks, so I can accept a colloquial tone. Where I was put off was when the flow of the language stumbled up against typos and missing words. I wanted to surrender to being at once disturbed and amused by the wacky, bizarre world Hensley created, but I often found myself distracted by the automatic edits my brain kept proposing.

I also feel a certain responsibility to warn you that Get Kilt is not a great pick for a reader who is easily offended. But what it lacks in technical perfection and political correctness it makes up in abundant creativity. You’ve never read a zombie book—or any book, for that matter—like this one.