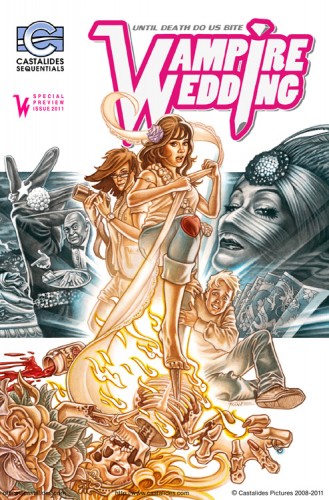 In the wake of the great success of Twilight and other vampire movies, London based film production company Castalides Pictures has turned the dream of millions of young aspiring Draculas, Nosferatus and Bellas from all over the world into reality by given them the chance to play a vampire.

In order to take part in the three competitions, aspiring vampires would need to let their imagination go wild and post their best vampire impressions on the Vampire Wedding Facebook fan page www.facebook.com/vampirewedding

– Play a Vampire in Vampire Wedding film: winner will have the opportunity to play a vampire on the film set.

The casting campaign was presented at the London Film & Comic Con from the 8 to July 10 by Gina Varela, The Devil’s Rock actress, and attracted a great deal of interest from both LFCC and horror film audiences and is creating a big buzz on the net.

In less than few weeks, the company’s Facebook fan page received hundreds of pictures from aspiring and professional actors and aspiring vampires from all over the world, with most of them giving a vampire impression by showing fangs and fake blood

To make the experience even more interactive, Castalides Pictures has just launched a free iPhone/iPad and an Android APP titled VAMPCASTING www.vampireweddingmovie.com/mobile to cast aspiring vampires from all over the world.

The first issue of the Vampire Wedding comic mini series, penciled, inked and colored by DC and Marvel comic artist legend Eduardo Barreto, will be presented at the end of October at the London MCM Expo Comic Con.

Vampire Wedding is a romantic horror comic mini-series and upcoming film created by Robert Huttinger and produced by Castalides Pictures’ directors’ Francesca Lombardo and Robert Huttinger. Robert Huttinger is a writer, producer and creator of high concept TV series and motion pictures such as best-selling RTL action TV series Cobra 11, and Cops 2000. He also has a romantic comedy film, Kiss the Frog produced by Michael London (Sideways, Get Smart, Milk, The Informant) with Katie Holmes starring currently in production www.imdb.com/title/tt1525852

The pages of the comic are penciled, inked and colored by Eduardo Barreto, a top artist from DC Comics and Marvel Comics who has worked on The New Teen Titans, Superman, Batman, Star Wars, Marvel Knights, Aliens vs. Predators and Indiana Jones. The cover art of the comic was created by Franke, an illustrator from Vienna. He has worked for production companies all over the world, doing political cartoons, comics, tattoo designs and record covers, to name a few.