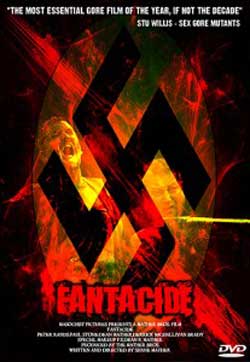 A Nazi cult is attempting to track down a mysterious relic which they believe will bring about the rebirth of the Third Reich. Unfortunately for them various other factions are closing in, hellbent on gaining the mythical power of the artifact for themselves.

Fantacide is one of those films that your intrigued enough to keep watching but feel like you have t go back and “re-watch” as you missed something along the way. Such was the case in my viewing most likely due to some thick accents in this UK extreme gore fest.

We open upon a cult ceremony taking place, Not much longer, the head priest of the event takes a piss on a “willing” subject before tearing his guts out with a tribal looking spear. 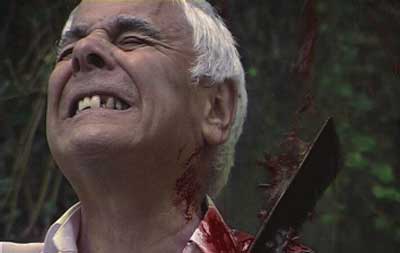 Dale (Dean Mather), is our resident animal rights campaigner who we are introduced to by a healthy dose of cat raping. Though its the tear the head off and licking scene that follows that might motivate a few fast forwards here.

This cult is led by a fellow named Oppenheimer (Peter Rands) who joins up with Dale (Shane Mather ) in the quest to find this much desired spear. The spear leads to both sides aggressively pursuing with the result of much bloodshed.

Now at this point, the characters and roles get a bit mixed only being emphasized by the extreme killing that transpires.

Fantacide is rich in practical effects and gore. So much that the fx often jump out at you in spades. Gunshot fights are often extra bloody with enough squibs popping out to make the scenes feel, …well , comical in just the executions alone. I think Fantacide is a 2 point experience. One being that it’s hard to follow and really get a firm enough grasp of, and two that’s its got enough “extreme scenes” to make it still a rich viewing experience.

Fantacide is surely a high contender in most extreme moments on film. I won’t go into all of them, but you get a pretty brutal rape….2 for that matter that involve blood, slicing off of extremities and a maniac who likes to feast on the aftermath. How about a rectum being blown out or bleeding from the eyes? Ya, there’s plenty here that will keep gore hounds and extremist tied to the screen

Now I have to also inject the disclaimer of “tread lightly”. Your in for the usual round of nastiness here. A pretty hardcore cat killing scene is hard to watch. Then of course you’ll want to add necrophilia, dismemberment and rape to boot. Dean Mather, brother to director Shane Mather ends up being the true star here with a heavy helping of gore creations around every corner. 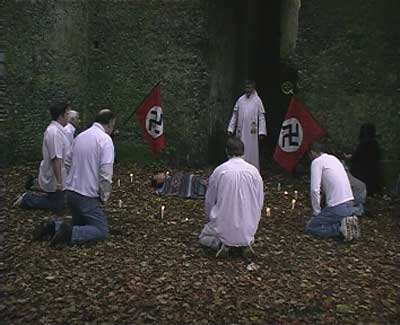 As a reviewer, I found enough hardcore content here to easily lump this film into our “extreme” category. The film may never really gain enough traction to win over audiences with it’s fragmented story line, but it will still provide that gut wrenching eye candy that underground audiences seek. As I’m told this film had some release problems which initially was acquired by Unearthed Films. I wont bother digging too deep but that its been noted as being available thru download only now.

A rather confused film, mostly due to its British accents. Though if you want extreme, then this is just what your looking for.