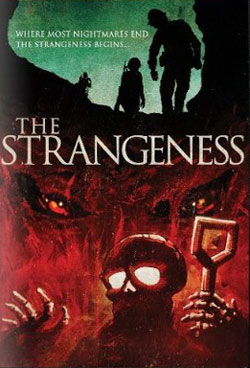 A group of explorers surveying an abandoned goldmine are trapped in a cave in, and find themselves at the mercy of a slimy, mysterious creature.

The Strangeness was one of those films buried in the 1985 archives Of movies produced and long forgotten about. Occasionally I would run across it’s name and after 24 years got to get a little curious on the title. Well for all you “The Strangeness” fans out there CodeRed DVD has saved it from obscurity with a debut DVD release.

Quirky is a good summary on this one with a touch of way too much cave drama. Though it’s safe to say that this film came much earlier than all the follow up cave movies that we’ve seen over the past few years. A problem I found with cave movies is they are just too damn dark most of the time. “The Strangeness” is no exception to that except for the highlight lighting they use showcase the actors. When you get right down to this film there’s not a whole lot going on here. The story is a simple setup.

A group are hired to excavate a cave that is believed to contain gold. Mr. Morgan, the business owner is basing the potential find on a rumor tied to a few urban legends about the cave itself. Secret indian land is one term used, while another involves a ghost story of miners who stopped midway spooked by something within.

If I were to give this film a slogan it would be “..something dwells”. We are greeted to an opening where 2 lovers Amy and Brian blow open the abandoned mine and soon after are attacked by “something”.

Fast forward to our expedition team of 7 and we a have a group full of drama and quaint little stories. All the signs of early films are pretty apparent here. The film score resembles something that John Carpenter would write if he were involved in the film. Our main characters go by the names of Flanders, Calvert, Angela, Mr. Hemmings, and Ruggles. Calvert is the moody one who keeps the drama pretty high. He also seems to be the only one who really knows how to navigate these caves. The area is called Golden Spike Mines which has been closed and shut down for quite some time.

“The Strangeness” drags on for most of the film with alot of cave conversations and a few fights to deal with. Though as they push forward they are forced to find a new exit when the cavern caves in blocking the return exit. Sloppy goop begins to show up leading up to the creature that they will eventually encounter. This creature which is just plain odd, borrows a few ques from Cthulhu and some silly stop motion animation. Its appearance itself is pretty silly as it sort of looks like a 1 eyed worm caterpillar alien beast. The movement though might draw slight comparison to the “Evil Dead” movies. (which used the same approach)

Since its entire movement is stop motion it requires a bit of puppet thrashing when its grabs its prey on screen. As you can guess the main goal of the is film is to get out without getting gooped to death. What and why it’s down there is still pretty much a mystery but it makes for a creepy little worm creep to plod around the catacombs. Favorite line of the film? “what about the exit?…there is no exit?. Good line eh? The film is directed by Melanie Anne Phillips with a note (as David Michael Hillman) which is just a plain weird way to list yourself.

Looking thru the roster of talent many of the cast was a first (and only) outing into film. Though it does look like Mark Sawicki who plays Flanders went on to a pretty fulfilling career in visual effects. Sawicki also contributed visual FX to “the Strangeness”. The film is noted as being made by a group of USC film students. It’s cheesy low budget look has actually garnered it some weird little cult following. (though why I can’t tell ya)

This film is no prize, but it might throw a giggle your way. I found it made me pretty sleepy with all the cave nonsense that occurred. I am not gonna say this is a must have, but it will fill that 1980s spot on your shelf for collectors I suppose. 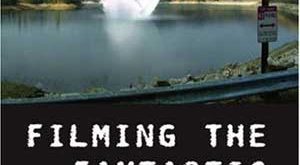