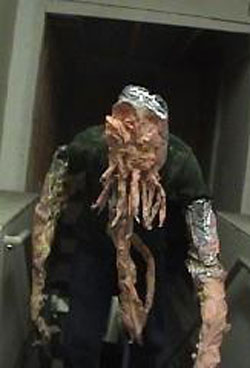 The end of the world has happened and the survivors must band together to fight the evil around them.

Covering indie horror is harder than murdering someone with six other people and trying to keep it a secret. Honestly, there’s a strong, well-defined barometer for what sucks and what doesn’t in mainstream cinema of any sort, but with something that’s independent, one is absolutely required to make concessions and take into account a much wider spectrum of factors that indicate what is and what isn’t a good movie. And while it’d be lovely to say otherwise, director Sonny Fernandez hasn’t made that task any easier with his film THE LAST BATTLEGROUND.

Operating on what must have been the smallest of microbudgets, Fernandez and his cohorts have created a film that bears absolutely every aspect of DIY filmmaking, down to the smallest detail. The acting is very spotty in patches, some scenes are so dimly lit that movement can barely be indicated, and the special effects can absolutely draw the viewer right out of the story. There’s nothing of that which can’t be found in thousands of horror movies that see any sort of release, however, and that’s where the similarities between THE LAST BATTLEGROUND and other no-budget horror flicks end.

What Fernandez has done with THE LAST BATTLEGROUND is make a movie that absolutely knows its limitations in regards to resources. The film and its players both know that the financial backing is simply not there to wow its viewers with neat tricks and eye candy. The actors aren’t on any list, and some of them will be, but the collective effort is something that’s honestly very watchable.

Even when the poor lighting obscures a scene so dramatically as to force the viewer to rely solely on sound cues to follow the action, the movie is somehow watchable, and a pleasant surprise. This is due largely to the amazing job done in characterization. There is something about each and every character in this film, from Bailey (well-performed by the biggest bright spot in the acting, Liz Dockter ) all the way down to Charlemagne (played by Dan Sorenson) that saves them from being simple kill-scene fodder. They all seem to exist in a world that matters, and they matter in it, overcoming anything that can be thrown at them by way of traditional film quality conventions.

Particularly strong amongst the strengths in characterization is the way that Fernandez wrote the female characters. It’s a major pet peeve of mine, in films of any genre, to have the only-too-typical, cardboard-cut female stock characters with absolutely unnatural strength who somehow still need to be saved by the lead male by the end. Every female character in THE LAST BATTLEGROUND is believable, in that they aren’t simply written against femininity and wrapped around the Hot Chick of the Month; rather, they’re characters who have earned or will earn their strength, characters with a measure of moral depth that defines them so much more than anything coming out of the UNDERWORLD or RESIDENT EVIL schools of Hollywood’s “strong female leads.” Admitting the differences in presentation and means available, I’d almost go so far as to say that the female characters in this movie are in the same realm of believability in strength as those found in Neil Marshall’s THE DESCENT, and that was probably the best surprise found in the movie.

In addition to that well-played characterization, THE LAST BATTLEGROUND also shows a lot of filmmaking hunger and passion in trying to tackle a story with such a grand, epic scope. The film splits into three, sometimes four lines of action at any given time, yet all are resolved by the end of the film, which clocks in at just about 2 hours. Indie horror tends to run out of steam within 90 minutes, so to see something that was watchably good for 2 hours with below average acting and special effects is an amazing feat in and of itself…

…speaking of those special effects, let’s just say this: I don’t know what I just saw. The simple synopsis of the film is that we follow an ever-dwindling group of survivors as they face a foreign, growing evil that consumes everything. Whether zombies or demons (which is thankfully resolved in the script), the creatures and effects in this film were obviously made with, frankly, very little money or resources. To be fair, that aspect really shows on the screen…but they’re still disgusting. The initial response is to want to laugh, but I still found myself a little sickened by the abominations that these creatures were. Whether intentional or accidental, the asymmetric nature of the makeup effects really did a lot to make these otherwise bad special effects seem somehow plausible.

Rounding out the film are a bunch of other factors, paramount amongst them being a kick-ass soundtrack. With the help of music supervisors Topher Williams and Patrick Ryan Hess, as well as Serenity’s Call and RYASHON, THE LAST BATTLEGROUND steers far clear of the typical, horsesh*t soundtracks full of nu-metal awfulness that plague so many modern survival horror flicks, going instead with a lot of atmosphere and a lot of fast-paced, aggressive metal. It fits the mood, the anger of the film very well and is one of the very best elements of the movie as a whole.

Combine that soundtrack with the aforementioned characterization boon, Fernandez’ competency as an obvious horror geek who can really direct, a sympathetic, multi-layered performance from Ms. Dockter, nods left and right to everything from Lovecraft to DAWN OF THE DEAD and even a full-on, “let’s get ready to kick the sh*t out of everything” preparation montage, and THE LAST BATTLEGROUND actually muscles through its sometimes-glaring detriments to become a very enjoyable movie. It’s my first Sonny Fernandez experience, and I’m happy that it won’t be my last. Now will someone do the horror community-at-large a favor and give this guy a f*cking budget?!?

Find out more at: www.myspace.com/sonnyfernandezfilms

Check out the trailer: www.youtube.com/watch?v=jfMI7EsynWg 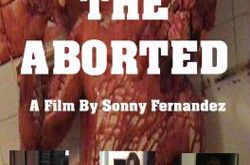