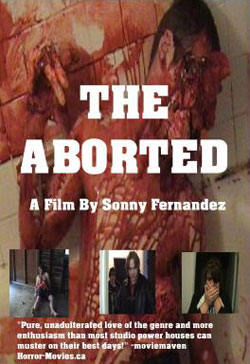 Someone has brutally murdered Tyson’s sister, at first it seems to be part of a killing spree, a serial killer bent on mutilating young women, but as Tyson begins to dig deeper he begins to realize that all of the girls have had one thing in common; they’ve all had at home abortions performed by a mysterious girl named Raven. As he begins to uncover the truth, he uncovers a supernatural and hellbent force, a force with only one agenda in mind. Revenge.

As the body count rises, Tyson quickly begins to realize that what he’s dealing with is more than he ever bargained for and the only escape, may be the sacrifice of his very soul.

Ever-prolific writer/director Sonny Fernandez hit me with yet another film of his to review, this one being The Aborted. I recently placed a self-imposed moratorium on his films, as I felt (and still somewhat feel) as though I’ve crossed the line from critic to fan when it comes to his work.

But then, I looked around at what constitutes so much of genre reviews these days, and a lot of what’s seen out there falls into just a couple of categories, such as fanboy marks simply gushing over flicks that everyone’s seen, just so that they can be the millionth person to give The Evil Dead 5 stars, or 10 skulls or bloody hatchets or whatever horsesh*t rating system they use. The other group resides at the other end of the spectrum, giving 10-star reviews to obviously sh*tty movies, because they’re buddies with the stars, or they’re promised some sweet swag or some other thing that’s going to compromise their integrity, ultimately leading people with dollars to spend down dark alleys to get mugged by sh*tty movies.

Both disgust me, and so I do this review because I know I’ll nail Sonny to the wall if The Aborted is a piece of sh*t. I consider him a friend of mine, but I’d feel awful if someone blew 20 bucks on something that not only didn’t entertain, but actually served to piss off the buyer. Godsmack did it to me, and I’ll be damned to ever let it happen to someone else.

The plot for this Down Twisted production is rather simple: some babies really hate being aborted. This should be more than enough to let the buyer know what she or he is getting into with a purchase of The Aborted. And from the beginning, we know it’s going to be heavy. There’s an air of regret, dread that comes straight through during the opening credits (easily the best of what I’ve seen in Sonny’s work thus far), and that somber note never really leaves. Establishing a mood for the movie is something that a lot of horror directors miss, shifting their focus numbers of times until the audience is confused as to just what they’re supposed to feel and when, where. The Aborted, barring situations where the special effects can draw one out of the scene a bit, is doggedly focused on maintaining a tone of regret which shines in every character, every situation. It’s melancholy, and it really works here.

Obviously, the faults with the movie are the same as they always have to be with no-budget filmmaking. Dimly-lit scenes, especially kill scenes, are almost impossible to see. It can momentarily have advantages, creating a sense of chaos that briefly punctures the mood to show the ferocity that brews beneath the woeful upper crust of the film. Mostly though, I was just left there thinking, “I know what’s happening, but my mind is filling in way too much here; I can’t be sure of what’s what.” That is a flaw, and it’s big. But it’s not enough to turn on the movie. Besides, there are more than a couple of scenes that totally get it right; “Rancid Guy on The Toilet” is a definite highlight when it comes to really solid, well-done and sufficiently gross kills.

One thing I definitely want to mention in this review is the name “Justin Kavlie.” He’s been in a few of Fernandez’ productions, and while I always think he’s been adequate for his roles in the past, I really identified with his character in The Aborted. He’s a really concentrated character, a ball of emotion that provides each scene he’s in with a tension that might have otherwise not been there. He’s frustrated, angry, full of lament and regret and constantly on the edge. For no-budget performances, I think he really delivers an excellent one that hits a lot of relatively profound emotional notes. As the primary character, he holds the movie together really well, something that you don’t see in the area of the no-budget pros all that often. “Good on him” for that, for sure…

…beyond Mr. Kavlie, beyond the tunnel-vision focus of a streamlined, trim script and beyond those flaws that budgets would always solve, this is definitely a Fernandez film. In seeing pretty much all he’s done at this point, I feel it fits in perfectly. If you’ve seen one of his films, you haven’t seen them all, but you do know what’s in store. It’ll be a story with gravity, with heart and a whole lot of ambition. There will be flaws, and you’ll either overlook them or you won’t. But these films, viewed in the frame of mind of a gang of singularly-focused dreamers who don’t over-indulge their eccentricities, and The Aborted in particular, prove that heart counts for a Hell of a lot. Add talent behind and in front of camera, dedication and a realization that, with no money, these guys and gals are living dreams in doing this, and it’s so damned hard to ever fault them.

I do; I see what can be fixed. Special effects could be better, occasionally spotty acting could use lessons, cinematography could be touched up in spots. But with next to nothing, the Down Twisted crew entertain. They do so consistently, and that’s why, even as a critic, I am a fan. I’m calling it down the middle, but I’m a fan. I’ve seen sh*t, and sh*t this ain’t. If you’re looking for horror that financially demands you use your imagination at the same time as it refuses to insult your intelligence, you can’t go wrong with Down Twisted, and The Aborted is certainly as good a start as any. 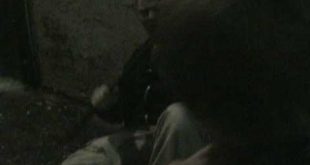