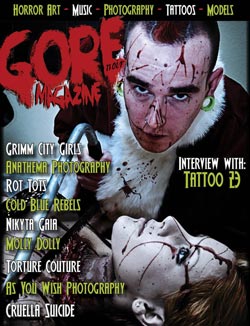 We were recently contacted by a new magazine on the scene by the name of Gore Noir Magazine. It’s in its infancy with a clear direction focused on horror culture without the film coverage aspect. I’ve seen a couple of like mags pop up with this intention, but only time will tell if its able to stick with it’s focus.

Usually the trend is to arrive, gather interest and hone in on its audience carving a niche that others will buy into . A remember a mag a few years back that tried a similar approach called “Red Scream”. The photos were cool, the models were lovely but in the end the gore-meets-model-meet-nudity thing didn’t pull in the funds to sell enough issues.

The industry is driven by filmmakers and studios though its always good to see someone who also appreciates the arts. Issue 1 begins with several pages of murder photography. Some more inventive than others but pretty much in the pose and drip blood-onto-body kind of thing. For this reason, it’s safe to say that the mag is geared to a R-rated audience and young girls who like to indulge in murder photography. The culture aspect is carried forward with individual features on horror products such as Nefarious Paws which produces horror hair products. Though my eyes were more akin to the products such as Undead Ed’s Rot Tots. These gross little creations are re-designed versions of common dolls and toys turned into things of nightmares. Sick and Twisted? yes, but cool as hell (literally). You have to love the attention to detail here that really screams….twisted!

The thing here, that viewers will most likely agree on is that alot of these photographers seem to have the same style. The product is mostly chicks with blood, and occasionally an inventive shot will rear its ugly head. I wasn’t blown away by any in particular but you get the sense that one may rise above into something worth checking out. Maybe I just prefer collage and paint….so as they say, its all subjective.

Phil Manomatul is featured with some of his pen and ink scribbles. I’m not sure yet, how i feel about them…meaning, they are kind of cool but are still lacking some degree of honed in ability. I believe if he keeps at it, in 3 years, they’ll be perfect.

Ok, lets talk about Underground Tattoo Piercing. Very cool designs here that are nothing short of brilliant. True artistry and seemingly inspired a bit by HR Giger. I’m sure the wearers of such designs won’t exactly be flashing them off in the corporate office, so I’m hoping that the wearers are comfortable in there professions.

Sass Obuhov also submits a few designs, but frankly they just weren’t for me.

Gore Noir is a unique magazine which features some interesting talent. I think its bound to get better as the magazine attracts higher quality talents. That’s not to say that the features were poor, just only slightly interesting while a few others clearly rose above. You definitely are getting what the cover promises, maybe not movies but some of the artists behind this unique underground culture.