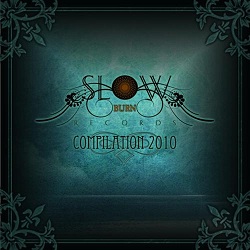 Sometimes music is about the groove. We can’t define what a groove is, but like a bad Peter Manoogian movie, we know it when we see it, or in this case; when we hear it. Slow Burn Records is a Russian post-metal label, putting out some of the coolest grooves in the business right now.

Compilation 2010 showcases ten Slow Burn bands. From the melodic, easy guitars of Catacombe and Starchitect, to the slow moody sounds of Talbot, and on to the angry pounding of Steny Lda, this album fills the whole gamut of the post metal scene. But, where much of today’s post-metal is content with repetition as style, this album oozes creativity. And, while much of today’s post-metal seem to just hit record and jam, the Slow Burn songs feel like there was a full song-writing process involved.  The songs ebb and flow from crescendo to decline with a passion that is often lacking in the genre.

Some of the highlights on Compilation 2010 include:

Colapse by A Cold Dead Body – You could place this song on any Fear Before The March Of Flames album and no one would notice. More than any other song on the album, this one captures the build-up and transition that characterizes post-metal.

Anna-Lisa by Catacombe – Captures the sound of a bunch of guys jamming in the garage, and hitting it just right.

The album isn’t without its flaws The Death Of Her Money, The Deadists and Talbot do not show the same maturity of sound the rest of the bands portray.  But, in the end, musical tastes are personal. We all have our own styles. I like a groove, and Compilation 2010 fills that craving nicely.

2. Somnolent – Emptiness Beyond The Horizon

6. The Death Of Her Money – Enguelades

** Note: The album is free to download from Amazon or the Slow Burn website. It’s a great way to learn about some fantastic post-metal bands from Russia.