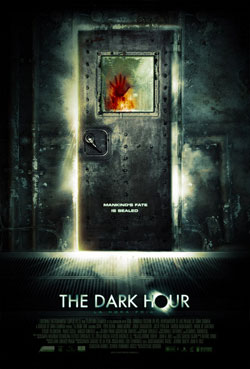 The eight years boy Jesús has been living in a crumbling underground facility since he was born with eight survivors of an apocalyptical war: the leader Maria and her lover Pablo; the gays Lucas and Mateo; the astronomer Magdalena and the teenager Ana; the soldier Pedro and the lonely Judas. They are permanently is state of surveillance, threatened by the contaminated mutants The Strangers and once a day they have to lock themselves in their rooms without heating to protect against the dangerous ghosts The Invisibles that attack in the Cold Hour. They cannot go to the surface, destroyed by a nuclear war. When they need supplies, medications and ammunitions, they organize expeditions to a store. When the menace of The Invisibles affects the safety of the group of survivors, they need to reach the surface.

Much of today’s releases seem to be centered around an apocalyptic future. Perhaps influenced by a subconscious fear we all share that everything is about to come crashing down. The Spanish film called “the Dark Hour” takes place in an already in-progress future. Several survivors group together in an underground facility commune style while they try and make due with the state of the world, supplies on hand and protection from everything else. Thru monitor broadcasts we learn of disease, bombs and social disorder on the surface. Pretty much the state of things rests in an apocalyptic reality that has introduced a few new threats to be frightened of.

One such threat is an entity called the “Invisibles” who attack in the cold hour. These ghosts entities peruse the corridors looking for warmth to prey on. The group has learned that to survive them they much separate, lock doors and try and burden freezing conditions under blankets. The separation is to keep from too many bodies generating heat.

Now if that isn’t enough to deal with, they are at constant battle with minions of diseased they have named “the Strangers”. The only defense is to gather weapontry along the way and shoot the creatures ……as a simple touch from them can infect one within days to suffer their same affliction. The team is head by Maria who keeps order thru tasks and routine.

What is odd is that we just assume this virtual existence without much reason for supernatural elements such as these “invisibles”. This in my mind makes this a healthy hybrid of horror and scifi. We do get to see more of these invisibles which are more like transparent aliens intent on killing and feeding. Again we just make the assumption that they are part of the struggle that the future for these survivors hold. In some ways it almost echo’s an Orwellian framework as the recycled tv programs play in the background explaining bits of the current fate of the world and the take over of enemy forces.

From this we learn of “how” these infected creatures came to be. Director Elio Quiroga excels at drama within confinement.

We also get a portion of the inner story told from the perspective of Jesús who feels the need to document details thru his portable video camera. Though the film doesn’t take the verite approach that has become a mainstay these days. It only provides more of a hobby POV that helps the boy pass the days. The camera work and film treatment stay within a gritty grayish blue tonality that enhances the industrial underground surroundings. What is interesting is that alot of the supplies they use to survive are provided in a upper location they call the “store”…though even that is something that will deplete eventually.

With a surprise ending on hand, I’m not sure exactly what it was suggesting totally. I have my opinion of the matter but it would be reckless to go into detail before viewers had a chance to make there own decisions.

“The Dark Hour” does a bang up job simulating post conditions and how others will group to survive. Relationships, schooling and training all all important parts of the order they must maintain for themselves and future generations. Material matters are reduced to only that which is on hand to learn from or use. Director and writer Elio Quiroga has a great sense of gloom mixed with drama that succeeds this sometimes slow moving movie. The combination of elements makes it for an interesting story and progression that is highly original on many levels while still staying familiar on others.