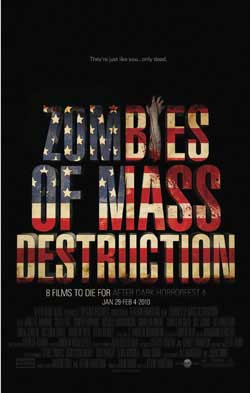 I saved this film for last as my patience has worn thin with the number of zombie films this last year has produced. Zombies films can be great as in the case of Zombieland, though if they are not, they your looking at least 90 minutes of redundancy…..so onward and forward.

ZMD short for Zombies of Mass Destruction is the 8th film of the 2010 “8 films to Die for” collection. It is in this case a horror comedy which I believe is something new for the 8 films lineup. Directed by Kevin Hamedani, this film is actually a good neighbor on your shelf for lovers of the film “Zombieland” or “Shaun of the DeaD”. A small quaint little town named Port Gamble is pretty close to your everyday Mayberry. You got locals running for office, a church going bunch and a small town mentality that doesn’t see past there own ignorance at times. Tom Hunt (Doug Fahl) plays a wall street gay man who has come to town to finally confess to his mother his true nature.

Cooper Hopkins plays Lance Murphy his “partner” who is intent on getting Doug to finally come out of the closet. The trouble is ….. just when Tom confesses to his mother, she dies and becomes a slobbering bug eyed zombie. Not only does he not get a reaction, but now he has to fend her off with a fire poker and insert her eye balls as they fall out.

Janette Armand stars as Frida Abbas an Iraq-blooded American who cant seem to convince any one form her town that she’s is every bit American as they are. Her return to Port Gamble comes after she decides to leave college to help out her father with his restaurant. This is also a premier role for the new lead actress. When the town breaks out into zombism, its got the remaining folks scurrying about for cover. One family in particular whose mother has been infected takes the law into their own hand when Frida shows up at the door. The father is convinced that her Iraq background has something to do with this mess which results in him tying her up to torture her. Some of the other townsfolk who happen to be in church lock themselves up convinced that the zombies outside are sinners transformed into evil by God. As expected the townsfolk are quirky, awkward and a bit ignorant.

ZMD, rides on the coat tails of way-too-many-zombie-films-this-year trend. Because of that I’m not I am comfortable with giving it another this-is-cool-and-funny kind of review. There are moments that work by themselves and the production is pretty decent…but I feel like I’ve been to this scenario 100 times this year. At yet even with so many of these zombie films emerging with comedy twists, I’m still partial to “Shaun of the Dead” and “Zombieland”. ZMD is the equivalent of Mayberry complete with rotting corpses. The gay coming out segments are probably the most humorous with other aspects sort of muddled between being extreme and being a dark comedy.

You won’t find any scary segments here, but you will find alot of dialog driven political satire and small town prejudices finely embedded for posterity. The filming location lists Port Gamble as the production location which I would of thought was a fictional place. Kevin Hamedani provides Direction and co-writing contributions. Perhaps the writers have more personal things to say about the town than we might have realized. In any case, ZMD is still fun to watch and does better than most in the zombie realm. Now we just need some new subject focuses for next year.