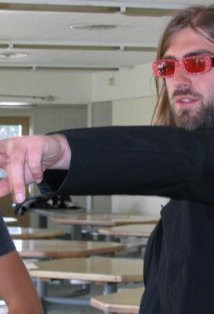 1. I know personally for me, when I watch movies that deal with these types of teen topics, it brings back feelings of when I was a teen. Did you take any personal experiences from when you were a teen and incorporate it into the story?

I did. To an extent, except the end, everything in this movie actually happened. I over dramatized it because I only had an hour and a half to tell a tale, but that stuff happened/happens. I would like to say on the record, that I was not personally tortured, physically anyway, and I have nice parents. I just hated school, the school system and the entire system of where I grew up. I had friends that had it way worse than I ever did and this movie deals with that. Here is a random story about one of my nice parents, then I will move on. At a festival in Atlanta, my father jokingly stood up and said he did not beat me enough right after Mad World played.

It was rad. Back on track, No one I knew shot up a school, but when we heard about it happening, we thought, good. We were happy. We thought things might change. They didn’t. When I got older, I realized how scary it was that we thought, “good” after Columbine and I realized it was even scarier that a lot of kids might feel that way, so I decided to write this film and ultimately make it. I am not trying to explain Columbine, I am trying to explain why I thought, “good.” Again, I was never personally bullied and was fortunate enough to get a girl or two, and I think most “out casted” groups are like that. They are not “losers.” They are often portrayed as that, but I think the biggest problem is environment, teachers, ignorant authority in general and places where judgmental f*cks, for lack of a better term, have the run of things. I don’t want kids to shoot up schools, but if the administrations are treating them as badly as we were being treated, I hope they stand up in some way.

Want to hear more? – Read our Review of “Mad World”

2. What kind of social statement do you think this movie is making?

That for the most part, upper middle class schools are run and operated in a large part by ignorant twats, that don’t think for themselves, don’t care about kids and need a hug. Kids fight with other kids. They are kids. Kids get into clicks. They are people. But at these schools, teachers and administrators take sides by favoring certain groups over others. It does not take a genius to figure out that a kid with blue hair and giant holes in his ears may need a little extra attention, but these schools are not run by geniuses, they are run by morons. Morons that picks sides, and the side I always saw them pick, was that of the clean cut looking kids.

There is nothing wrong with being a clean cut looking kid, but there is something wrong with an adult that wants to be “popular” with them. I say clean cut looking instead of just clean cut because looks can be deceiving and, like all kids, most of them get in to all kinds of trouble anyway. Teachers and Administrators at these American Jesus Nazi Factories help one side, one click of kids, rule another. Many teachers and administration actually want to be a part of the group they consider cool so the “clean cut kids” or the “jocks” get a slap on the wrist, while “the freaks” get a punch in the face for the same thing. It’s disgusting. Bullying is bullying whether it is done by a kid or a teacher. The kids are not disgusting, on either side of the fence, not as a whole anyway, or they are all disgusting depending on how you view teenagers, but the adults that should be setting examples and not judging, they are down right repulsive. Not to mention a ton of the teachers are barely competent enough to put on a t-shirt. I laugh when the teachers union gets mad because the government wants to test them. Like they do not need to know what they are talking about. I’m getting a little too heated, sorry and thanks for reading, if you still are. 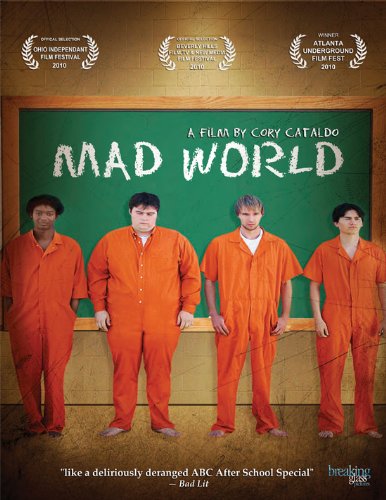 3. What was the most difficult part of making this movie?

4. Do you think there is one teen topic in this movie that stands out more so than the others?

I’d like to think it’s more of a “human” topic than a “teen” one, but I think the topic of teen friendship and the power it has to help you get by stands out to me. I don’t think that would be the audiences answer and I’m not sure it should be, but for me, personally, that’s it.

5. How do you want your audience to react to this movie?

6. Is it easier working with adults or teens?

Ironically, other than the Dylan Vigus (who played Will), I was the youngest person on set. I find that age does not matter as much as the individual person and we got to work with some great people on this set as well as after the fact. I really want to thank Ramzi Abed for selling this movie. I know you didn’t ask that, but I never get an opportunity to give him a shout out and he deserves one.

7. Do you have any interesting behind the camera stories from the making of this movie?

We hired our DP 3 days before the shoot. Our original DP… Well I will leave that alone, but it is definitely interesting to prep a feature with your DP in 3 days.

8. Mad World really touches on the horrors of being a teen in America. Does this movie magnify teen problems or are teen problems as bad as they seem?

9. Do you have a favorite scene that we should look for?

When Jevon is in the principal’s office before he gets expelled and he says, “I’m in here because I was by a truck.” There is something so cute and innocent about that ridiculous line that makes me warm and fuzzy every time.

10. What is next for Cory Cataldo?

Nothing at All. That is so much fun to answer. I am actually making a movie called NOTHING AT ALL about two teen runaways on a road trip funded by a pedophile, trying to be drug dealers and learning that the pursuit of happiness is happiness. It’s like Forrest Gump on crack. 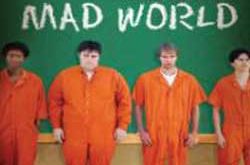