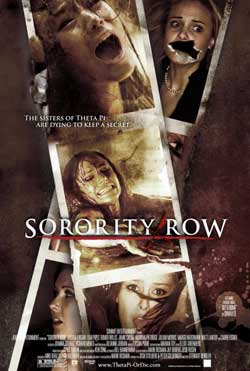 When five sorority girls inadvertently cause the murder of one of their sisters in a prank gone wrong, they agree to keep the matter to themselves and never speak of it again, so they can get on with their lives. This proves easier said than done, when after graduation a mysterious killer goes after the five of them and anyone who knows their secret.

The original film which went by the name “The House on Sorority Row, ” was just enough off the radar to really make this film feel like not that much of remake compared to other recent re-introductions. Maybe you caught it back in 1983 and then maybe you just didn’t care.

Personally I think its a clever marketing way to present a film with a bunch of hotties to new young audiences. The other thing that’s interesting here is no real top namers in the group. A fresh batch of well shaped newbies to make it feel like a ensemble rather than a top line staff. Directed by Stewart Hendler, the film stars Briana Evigan, Leah Pipes, Rumer Willis, Jamie Chung, Margo Harshman, Audrina Patridge, and Carrie Fisher. Carrie being the odd addition to the acting team but in her more mature persona of acting than the “Star Wars” days. Hey…it’s good to see her back on the train again and horror for that matter.

Life is beautiful when you hold sorority parties on screen. Everyone’s perfects, the booze, the music, the games, the atmosphere ..picture perfect for that matter. Almost without even watching the first frame your gonna start placing this one into formula scripts that follow suite to movie like “I Know what you did last summer” and maybe even “Terror Train”. In fact a recent film also comes to mind “Donkey Punch” where the premise follows a group of young nubiles in the prime of their life before the tragedy occurs. Well the good news is your right on track. the bad news is, maybe you’ve been duped with the same stuff you’ve seen time and time again with a different package on top. Then again the term sorority is a bit of old school horror thrown in for good measure.

In any case, great, good, funny, bad and you’ve kind of drawn up the first 10 minutes. A sorority in an effort to pull a prank on a guy who cheated on one of their members stages a fake death per way of drug overdose. The boy who was given roofies to indulge on his girlfriend was actually given vitamins in exchange as part of the sorority plan. As they so eloquently put it….cheat on 1 and you cheat on all. The joke is carried out as they head towards an abandoned area to dispose of the body. The only problem is, the girl is justpretending while her friends play up in that fact. Well as mentioned this sets the tone for the early tragedy.

The boy who assumes she’s dead, plunges a crowbar into her to begin dislodging the body. The trouble is, she wasn’t dead. Now the team with a “real” death on there hands has some skeletons in the closet that they have to keep buried.

The film itself is pretty treaded into Hollywood style horror formulas aimed at young adults. The reality is, there isn’t anything new here that you haven’t seen a ba-zillion times. Incrementally the girls get murdered off 1 by one in Friday the 13th style like fashion. All of this builds on the Scooby doo factor of who is killing the girls of Theta pi. Misdirection is used as much as they can muster but in all it’s just a countdown film built around a thriller scenario

The bitch factor is turned up to 10 which only really shatters the hot girl concept in exchange for not-really-caring-who-dies-and-who-lives. Of course more partying continues and more ridiculous “sisters for life” crap that only melds away with the back stabbing, harsh words and every girl for themselves routine. This film is best left to popcorn night for teens who just turned old enough to watch these kind of films. The rest of us might find better reasons to catch up on some sleep and maybe even take a chance on the original film of 1983, than the recycled Megan Fox look alike contest.

Some cool facts from Wiki pedia:
Sorority Row entered pre-production in January 2008. Principal photography began on October 16, 2008 in the Pittsburgh area. Although set in Anytown, USA, producers of the film wanted to take advantage of Pennsylvania state tax credits and the strength of local film crews. The film was mostly shot at night in Munhall, one block from the Carnegie Library of Homestead, where about 10 houses were dressed to resemble a sorority row. The graduation scene for the film’s fictional Rosman University (named after the writer/director of The House on Sorority Row) was shot ouside of Soldiers & Sailors Memorial Hall in Pittsburgh’s Oakland neighborhood. Interiors of the Theta Pi sorority were filmed on sets built in a warehouse near Crafton, Pennsylvania.[5] Filming ended on March 26, 2009. The movie is said to have a $16,000,000 budget and the film was officially completed on May 2, 2009.