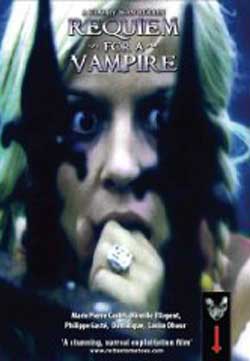 Two pubescent, pig-tailed, virgin schoolgirls, Michelle [Mirielle d’Argent] and Marie [Marie Pierre Castel], run away from their school and find themselves lost in a cemetery which leads to a chateau inhabited by vampires and naked women in chains. The girls try to escape, but they are bitten by the vampires’ aging Master. The Master decides to initiate the girls in order to make them perpetrators of the vampire race (which is about to die out). Eventually, of course, the girls will have to be deflowered because ‘you cannot be both virgin and vampire.’ For now, however, their job will be to hunt by day and lure victims back to the chateau for the vampires to feed upon. Michelle brings back a victim, but Marie takes pity on hers (Frédéric [Philippe Gasté]), begs him to be the one to deflower her, and then sets him free.

A clown and a Harlequin walk into bar…… Well not quite, but they are in a car chase in which there driver gets killed and then exterminated per a nice fire bath. Our 2 leads Marie (Marie-Pierre Castel) and Michelle (Mireille Dargent) have “escaped” from a New Years eve party where they were dressed as clowns (go figure) enter into the picture sporting there best circus clothes. Why? not so sure, but it looks cool in a sort of retro Bowie era fantasy trip.

As they make there way through the area they seem to be able to get by stealing food, a motorbike and taking naps in a local cemetery. Oops what’s that, slept to long and got buried by mistake. Not a problem as Michelle crawls out of her dirt nap CreepShow style.

If your lost yet, that’s ok. there not much talking going on yet just some fancy eye candy and a will to go on to the next odd little scene. In fact I began to think I was watching interpretive dance without the dancing.

In theirdaily stroll they come across a castle or chateau as they call it. They enter, head upstairs and find a nicely laid out feather bed. BAMM, cut to 2 chicks lying naked in the bed having lesbo sex. No buildup, no foreplay, just cut right to it. Somehow I found that piece oddly erotically humorous. Oh well, enough of that. They dress up and checkout the rest of the place. This is when they start running into vampires and what looks like Halloween props. There response? They start shooting the props including a rubber hand that’s sticking out of the castle wall. This is what I love about these films. You never what’s gonna make you laugh or scratch your head.

After meeting up with the vampires we really get to the meat of the film. Vampire sexing!! Held as prisoners chained to the walls downstairs beautiful women are seen ravaged by the vampire lackeys in full frontal nudity. This goes on for quite some time, that is until the girls are told they can’t be virgins and vampires. Darn ,….. looks like they’ll have to go out and get random sexed so they can become full vampires. Not a bed in sight, that’s ok…the dirty castle walls will do. All in a days work.

Now this film perhaps features the only shot I’ve seen of a vampire bat attached to a womens crotch having a little nightcap. The bats are something to behold themselves which are more like safety pin attachments. But that sexy bat scene….now there’s something you don’t see everyday. There’s plenty of nudity in this film that indirectly has something to do with vampires. However I’m putting my money more on just the nudity itself.

Directed and written by Jean Rollin it has all the makings of classic early 70s sexual romp horror-plotiation. By the looks of her esume she’d been at this for quite some time. I’m not to familiar so much with here work, however I did find this piece of wikiepedia to add:

Jean Michel Rollin Le Gentil (born November 3, 1938 in Neuilly-sur-Seine, Paris, France) is a French film director, actor, and novelist best known for his films in the fantastique genre. Rollin is credited as having made the first French vampire film (Le Viol du vampire, 1968) as well as the first French gore film (Les Raisins de la mort, 1978). He is also one of the early pioneers of French X-rated cinema.

I can tell ya that some of the shots are pretty visually stunning. While others maybe not so much. Like many of these films you can get lost really easily so attention is a must. The fun is in the style, the ludacracy and the era of these films. Classic to some, coasters to others. The truth is I know alot of folks who love these films and are damn glad to see them get reinstated. So have at it!! There’s of course subtitles to help, though the film really doesn’t have many lines.