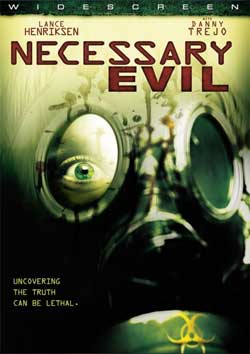 Locked inside Edgewater Psychiatric Institute is a deep, dark secret. Deborah Fielding, budding investigative journalist, holds the key. Nothing can prepare her for the Pandora’s box she’s about to open. Following a trail of eyewitnesses, missing persons, and anonymous tips, Deborah will stop at nothing to uncover the truth, even if it means confronting the demons from her past. Deborah’s journey plunges her into a supernatural spider web of intrigue and corruption leading to the highest echelons of power.

The FDA (Food and Drug Administration) has utmost responsibility of deciding whether medication is safe and legal to distribute to the American public. Always under high scrutiny of public protest due to what some think is unethical treatment of research subjects, one may wonder how the FDA can get away with so much without trouble with the law. Peter J. Eaton’s Necessary Evil answers the question by mixing the power of money and supernatural powers to aide an unethical research facility in risky dealings that eventually gets defeated by curious bystanders of seemingly unbreakable power.

Sixteen years prior to the movie, a scene of a group of scientists is shown in a cavern discovering an ancient hieroglyphics system of writing. Their presence provokes the spirit that inhabits the cavern, and the head of the scientists immediately captures the demon-like spirit monster being. The scientist that is home to part the demon spirit, Frank Sanders (Gary Hudson), decides to take the monster back to Edgewater Psychiatric Institute. Sanders, powered by the demonic monster, holds unlimited power to get away with anything, which will aide his company versus the FDA. 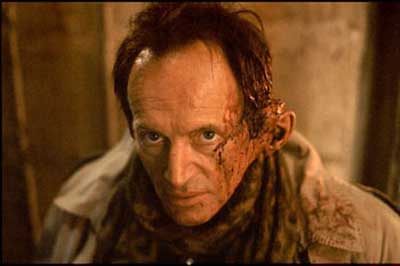 Deborah Fielding (Kathryn Fiore), a young college student, is shown sixteen later to Sanders’s finding in a doctor’s office getting a checkup. Immediately, we are made known that Deborah is pregnant, and Dr. Logan prescribes her Reficul. Reficul is a new drug just being approved by the FDA as a pill taken over time to replace an epidural during childbirth, and Deborah is immediately bothered by the distribution of an experimental drug. Deborah is shown questioning her college professor to do investigative reporting at Phoenix Pharmaceuticals, and depicted as the stereotypical young woman prying into business that should only be handled by the higher ups with money. Deborah also researches into Reficul, which is later a key to the puzzle of the sabotage of Phoenix Pharmaceutical.

We are also introduced to a birthday party of an innocent family. The Green’s are just finishing cake when their door is blasted open by men dressed in black. The mother, Helen Green (Tarri Markell), is immediately forced against the wall by the eldest man and interrogated by the rest of the men from the intruding Phoenix Pharmaceutical Group. They then kidnap the son, Stephen (Aaron Fors), and the family is admitted to the hospital. Detective Russo (Eric Feldman) is then introduced and investigates the scene, able to decipher the ancient writing in blood that says “Know your place.” We see then and there that powers beyond a regular human are indicted upon anyone who tries to get in the path of the great pharmaceutical company; even on this seemingly innocent family. Deborah eventually gets clearance into Edgewater, and through twists and interrogation, she finds that she was drawn to this lifetime enemy in more ways than just hate. Russo eventually pieces together clues to find Deborah to form a coalition in contributing to the downfall of the powerful corporation.

Necessary Evil had an interesting storyline, which kept my attention throughout the movie. There are so many questionable ties between the government and powerful organizations, which it is easy to get caught in the middle and want to know how some of these unethical organizations get the money for what they do. Even though some of the special f/x was kind of cheaply done and quickly CGI infused, especially the supernatural monster shown at the end of the movie, they did what they were supposed to portraying an evil spirit inhabiting humans. 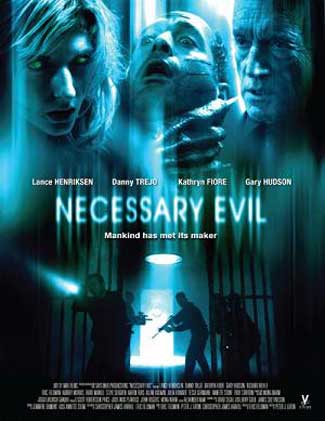 Also, the glowing green eyes of the inhabitant of the demonic sprits are completely unrealistic in viewing. There is also not much blood and gore, which was only shown when the monster is being fed parts of a mutilated body. There was also a random fight scene between Russo and Barro (Danny Trejo), which partly didn’t make sense to the storyline of the movie. The actors, however, did an excellent job portraying their parts of humans being caught up in the scheme of powerful drug companies. There are also well written plot twists that keep the viewer thinking, as the movie rolls on to a surprising ending. 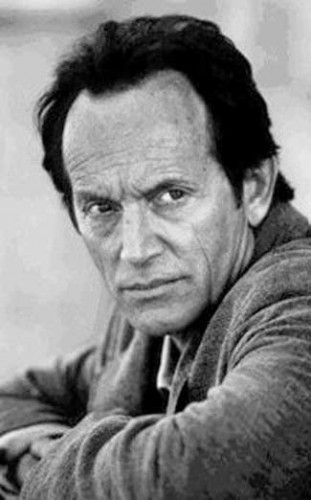 The powers of good vs. evil are portrayed as the drug company vs. the general public in Eaton’s Necessary Evil. The existence of hidden alliances between government and money fuel many questions to how ethical our federal system truly is. Necessary Evil is definitely a good mix of Sci-Fi happenings and the horror of being controlled by a system of finance/supernatural god-like powers that can leave a sense of wondering the question: who really decides what is safe and what is unsafe in our lives?