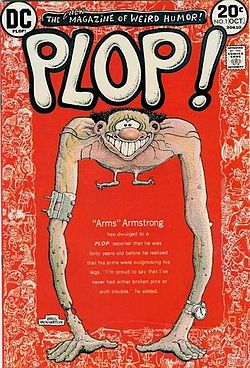 The mere fact that I’m reviewing this age old comic might be proof of my age, however those who remember it, surely miss the great times and laughs that this MAD magazine-like-off-shoot of a comic delivered. From creator Sergio Aragones, we are introduced to Cain, Abel, and Eve, …3 wicked little hosts that would each introduce a different story of interest. The stories were morbid or weird in nature with every issue featuring an outstanding character per artists Basil Wolverton or Wallace Wood. This intro issue features the rather bizarre “Arms Armstrong” surrounded by the trademark scribble drawing border that is prevalent through out the issues.

The “new magazine of Weird Humor” as it was called was created to bring the EC comics approach combined with humor. So as we begin, we get a smattering of smaller 1 off cartoons combined into pages with the 3 stories inclusions following a small but moral ending conclusion almost in “Tales from the Crypt” manner. This issue ! contains “The Escape”, “Kongzilla” and “The Gourmet”.

The humor may be cheesy slapstick but for the time it was something new and inventive. A common element seemed to be prisoners in a dungeon accompanied by funny little quibs. Fans often might sit consumed just in the border images alone. It’s death with a kicker and “Plop” was a force to be reckoned with. “Plop” refers to the sound of things that happen in an unfortunate situation. Thus was the premise of the cartoons that littered thru-out.

As I further my reviews on the Plop collection, its worth pointing out that each of the 3 characters were set up to try and outdo the other in morbid hilarity. The series itself ran from 1972 until 1976. They were a favorite among collectors as well.