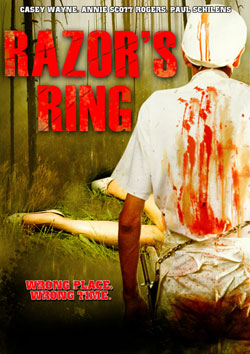 A businessman is trapped in a nightmare when he’s kidnapped by a clan of murderous cannibals. Red, the gang’s matriarch, promises to free him, but he uncovers their terrible secret after biting into another prisoner’s ring at a farewell feast. He realizes that a fellow captive who was “freed” days earlier is now the main course — and that he must escape before ending up on the menu, too. Annie Scott Rogers and Casey Wayne star.

You thought things were bad, and then soon find out it’s only getting worse. Scott, a business man on a jog thru the streets, finds himself kidnapped at gunpoint when he witnesses a car swerve into a dog crossing. The 2 drivers, Razor and his WT girlfriend Julie are playing “hit the target” for points as they haphazardly tour the countryside. Their motivation for this is unclear, but they have a gun and a sick sense of entertainment. Scott is forced in for no apparent reason than to be taunted along the way.

Razor, the gun toting boyfriend assumes to have some sort of plan that really never materializes. Before they can get to that they insist on targeting an old man and young girl on the side of the road. The car misses the girl but kills the old man prompting the picnicking family to attack the car and beat the crap out of all 3 of them. The only problem is that innocent Scott is assumed to be part of the gang.

When they are transported over to a local farm-like location, 2 men lock the team up in a wooden cabin until the leader, an old women who calls herself “Red” can decide what to do with them. Leading up they are brought out 1 at a time to be toyed with and tortured. But it appears that the unassuming handicapped RED has more diabolical specific plans with these folks. They are held prisoners and promised to be let free “eventually” but only after they are punished a bit for the death of one of their own.

Razor’s ring is a different type of film that is kept in a micro budget range. It crosses between a Bonnie and Clyde intro into a more torture horror type outcome. Since it stays budget conscious alot of the torture, kills and results are usually kept out of camera range . In fact alot of it is designed to be more “after the fact” and imagined than on camera. Normally I wouldn’t give away the premise, but the premise is given away in all the published synopsis posts. So yes, these 3 have found themselves in the midst of a small private community that thrives on cannibalism. This event is not isolated as Red has been doing this for quite some time.

The captives are part of the immediate meal plan which is brought to our attention when a private gathering is thrown of well to due folks feasting on human meat mixed with stews and such. Scott, the survivor of the group is not content to just become the “next meal” and does his best to keep looking for ways to get help or escape. They try and prevent that with a handmade collar device that alarm activates upon trying to leave.

The film tends to slow way down towards the final portion of it but does a decent job of a slow build up. Your not going to get many doses of eye candy here, but you will get a bit a the old “what’s up with these rednecks” kind of story. The film is directed by first time filmmaker Morgan Hampton. Because of its low budget approach it won’t appeal to every horror fan but it still manages to squeak out a decent amount of story telling. The acting talent on board is mostly newcomers, but for a micro budget they hold up just fine. Final thoughts on this one are that it isn’t gonna be a new experience for viewers but it isn’t bad either for a first time out.

I think Hampton will fair better when he has a budget to work with so he can exploit the horror moments a bit better for the cameras. The original release helms from the folks at York Entertainment, which produces or at least acquires alot of films on this same level of presentation. This new re-release though comes from the folks at “The Associates”