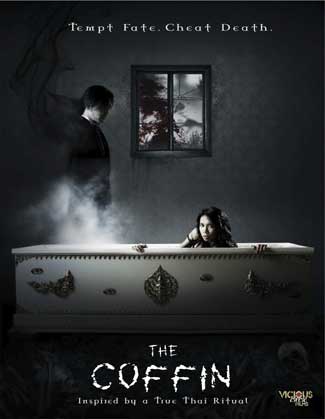 June 20, 2011 – Philadelphia, PA — Breaking Glass Pictures will release the Thai horror film “The Coffin” on DVD August 30 under the Vicious Circle Films label. Based on a real-life ritual and shot partially on ancient Thai spiritual grounds, “The Coffin” was a box office phenomenon in Thailand, breaking records for highest grossing Thai film of all time upon its release.

Synopsis:
Su and Chris are two strangers whose lives have been struck by tragedy — Su has been diagnosed with lung cancer just days before her wedding and Chris’ longtime girlfriend has fallen into a mysterious coma. When they both learn of a bizarre Thai ritual in which a living person lies in a coffin to reverse bad Karma, they both decide to partake in a mass funeral for the living. Soon, their lives have turned around — Su’s cancer vanishes and Chris’ girlfriend awakes from her coma — but the good fortune is short-lived. A series of terrifying paranormal events suggests that Su and Chris may have upset the Karmic balance of the universe by cleansing themselves of bad luck, and the people closest to them may ultimately pay the price.

DVD extras will include deleted scenes, alternate footage, cast and crew interviews and the international trailer. 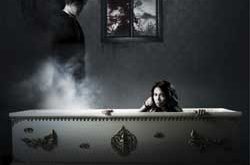