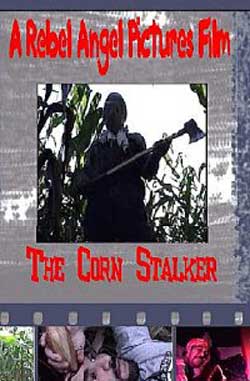 There is something loose in the cornfields of Boonsboro. Something evil….For two myth hunters looking to write a book on local legends, a vengeful bounty hunter looking for his missing sister, and a lost DJ, this evil is all to real. In the form of a masked killer. The Corn Stalker pays homage to the grindhouse days of 80’s slashers and brings cheesy horror to its audience.

The Corn Stalker you say? Well never let it be said that HNN only reviews studio produced movies, as generally films fall into 3 categories. Studio (bug budget), independent or micro budget. Though “The corn Stalker” actually doesn’t fall into any of those. Yep, we even get what I call home spun, which is 1 or more first time film makers who pick up a video camera and shoot. This film manages to even look dated with it’s VHS footage and analog color bar creeping in at the bottom.

I dare not send this to my reviewers in fear of them never reviewing another film for me again. So with heavy sigh, “The Corn Stalker it is. Now being in the business I can still appreciate the effort, and confess to shooting a few in this style in my younger days. Though I think we come to expect a few things in place even if the footage is weak. One, the sound needs to be consistent. Which in this film is not. One side goes out, the other comes in, the dialog track goes down and the signal pops in out of analog and stereo. In the very least, the sound has to be even and equalized which it isn’t. The score is atrocious which is a combo of cheesy power chords and some ancient Casio keyword with a metronome. The movie release seems to be promoting the music acts behind this which I’d suggest otherwise.

Though while that would bleed peoples ears nowadays, the retro indication sort of put a smile on my face. At the time of this review there was no imdb credits to pull from but I’ll still do the favor of shouting out the filmmakers behind this one. Rebel Angel Pictures in conjunction with Dusty Fleischman’s have released their 2002 project which most likely is pulled from 1990 VHS tapes (I’m guessing)

The film is raw, crude and lowbrow but then again it’s this entrepreneurial attitude that has birthed many future film makers. The premise has a killer posing as a scare crow who rapes and murders those foolish enough to stray off on their own. Cornfields, corn-holing and a costume tribute to “The Dark Night of the Scare Crow” make up the villain of this film. A local bounty hunter comes a calling in search of his sister, a rave is about to launch and the sheriff is slightly annoyed at the town which normally doesn’t drum up much action. From here on, you get cornfields, a masked killer, and alot of locals running back an forth thru the cornfields. Sound corny?? (couldnt resist) 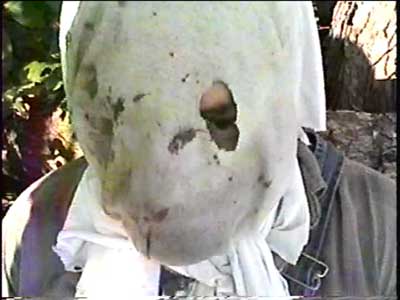 The FX are simple, and sometimes low-rent though you get what you get. I would have to say I can’t recommend any type of purchase on this until they clean up the audio. A few times the tracks blew out so loud that my speakers were buzzing (distorted)…other times, there was barely any audio at all. Slasher-inspired fare though done dirt cheap. Hopefully a cleanup will ensue before this goes public. I’m even gonna lend a hand on this one….purchase Sound Forge…equalize your levels and make sure they show (stereo) up in both sides of the audio track…there ya go!