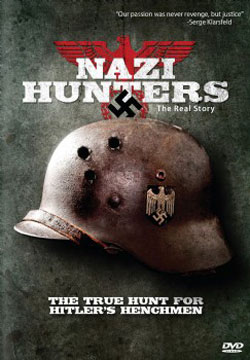 See the real life pursuit to track down WWII fugitives for their crimes against humanity. This harrowing film presents the true-life tale of the unrelenting pursuit of Eichman, Mengele and other Nazi criminals in Europe, the United States, the Middle East and South America.

I’ve seen my share of Nazi focused historical films, but I must say this is easily among one of the most harrowing. We often are injected with talks of Hitler, his atrocities and the Nazi regime, although many times we don’t get to see much about the horrible realization that happened. Nazi hunters is about the war criminals from Germany who were sentenced to death for there atrocious war crimes against the people and especially the Jewish. Hitler, a dictator who believed in a master race influenced record numbers to join his cause in Germany and rid the world of those not of German blood.

The result was the builiding of several concentration camps, executions, and the orders of victims used for the sole purpose of government experimentation. This was a dire and dreary time in the world’s history that will forever be carved into the books.

What is interesting is that most of the documentaries I’ve often contained stills over real footage. This collection actually reveals footage of the murders, body pools and suffering in B&W video. The soldiers are seen hauling off bodies into pits from subjects who were severely starved or malnourished to the point of skin and bones. Chucked into piles like garbage, the Jewish are disposed of like nothing you’ve ever seen with pits being dug, bodies stacked and several left to die from dire straits and abuse. It’s not a pretty sight by any means but it is important to see where we’ve come from as a society.

With all this in mind, former Nazis are targeted and hunt down thru history to pay retribution for being a part of something so diabolical. The top liner team is collected and put on trial for war crimes before a trial of several nations. Under hot spotlights and long hours they are shown evidence filmed of the atrocities they committed.

Real footage taken during this time shows the nazi leaders as they are hung in numbers. This counterbalances the earlier footage of them inflicting the same tortures on the jews and prisoners, though by far less humane. Dr Mengale footage is shown as he conducts tests on children and humans for the research of the nazis. Though even with many of the nazis escaping thru undercover relocations we find that over the years the distance hasn’t protected them as they are eventually all hunted down. Several of the higher officers are sentenced to immediate death thru intoxication.

Meanwhile Germany tries to rebuild itself from rubble and carry forward leaving the scarful memories behind them. 50 million dead, 1934 – 1945 remains a test on humanity with the corrupt views and actions of an evil political agenda. The DVD contains 2 disks, though I am more favorable to the faster moving disk 1. Disk 2 covers more of the political agenda and persons involved with those who are still to this day chasing down the last of the nazi race.

The footage provided is excellent preserved proof of what the times of that era revealed. A few shots are even in early color but most were filmed in Black and white. Still the names and accusations are both incredible and tragic. Eichman, Mengele are among the many criminals mentioned who supported the nazi agenda.

Nazi Hunters is as real as it gets. Much of the footage may be too much for some viewers who can’t take the horrible nature of the crimes, real life executions and disposal of corpses. Though it may be one of the more important documentaries I’ve seen as it doesn’t fluff the ideas and realities that occurred during and after the holocaust. Very well put together and as strong of a film as I’ve seen on the days of Hitler’s wake.