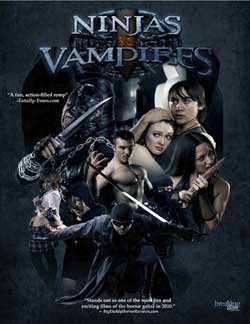 Ninjas battle Vampires for the fate of the world in this all new Action-Horror-Comedy from the creators of 2010’s cult smash, “Ninjas Vs Zombies”! Moments after down-on-his-luck Aaron is rejected by the girl of his dreams, they both are attacked by blood sucking VAMPIRES. Driven to save her, Aaron tracks down the mysterious NINJAS, who wage a nightly war against the forces of darkness. Now, as the Vampire overlord Seth plots to destroy Mankind, Aaron has only one choice – join the ninjas, save the world, and get the girl… or die trying. Sexy, funny, shocking, and fun, NINJAS VS VAMPIRES delivers an action-packed comedic adventure unlike any other!

From writer and director Justin Timpane comes Ninjas vs. Vampires, a relatively successful follow up to the cult classic Ninjas vs. Zombies. You’re going to have a better time watching this movie if you know ahead of time that this is a low-budget affair. The CGI can be very cheesy at times and some of the acting can make you wince at the banality of it all but when taken as a whole this movie offers some good fun.

Aaron has a problem. Alex, the girl that he is in love with, just wants to remain the best of friends. It’s the classic nice guy syndrome. She uses him as the shoulder to cry on, the ear to listen to all of her issues. But Aaron wants to take it to the next level and dang it, he wants to do it right now. Going for the gusto, he blurts out his feelings to Alex and to his horror, she promptly rejects him. Poor guy, not only have his dreams been crushed but out of nowhere the two are suddenly attacked by vampires. Talk about things just not going your way. Lucky for them a clandestine group of ninjas shows up to save the day and before Aaron realizes just what the heck happened they are transported away.

Alex has no clue what just went down. Her memory has been manipulated so that she doesn’t remember any of the events that happened. Aaron does his best to convince her by telling her all about the vampires and the ninjas but is predictably met with a laugh. Frustrated, he goes to visit his friend who tells him that the secret to all of these strange goings on may very well lie with Cole, the owner of a comics and gaming store. Find him and you will find your answers. Predictably, Aaron finds out a whole lot more than he bargained for as he is introduced to an age old battle between vampires and ninjas.

Ninjas vs. Vampires is one of those movies that you’re either going to “get” and have fun watching or you’re going to want to turn off the television. There really isn’t much of a middle ground. This is a low budget film and, as such, the viewer is treated to the usual trappings of bad dialogue, cheesy CGI and usually I would say bad acting as well. In this film, however, the acting was surprisingly good. Yes there are some bad actors in here and no, the Oscars won’t come calling any time soon, but some props are definitely called for. Jay Saunders stands out as Aaron, the poor befuddled hero who will do anything to get the girl of his dreams. Daniel Ross and Cory Okouchi are fun as the male half of the ninjas, ready to save the world or in the case of Daniel Ross, drop a one liner at a moment’s notice.

Speaking of one liners, there are quite a few though more often than not they show up in the form of pop culture references. One memorable scene has a young girl with an “I Love Edward” tee shirt getting killed by a vampire. Justice served if you ask me. The blood flows readily as more and more battles are waged. The poor vampires are killed by a combination of swords, stakes and bad CGI as their skeletons are engulfed by flames. Justin Timpane does a serviceable job directing and if nothing else keeps the action coming at a good clip.

All in all, Ninja vs. Vampires is a fun film, depending of course on your taste for cheesy low budget movies. I would rate it more a rental as repeated viewings may show too many flaws to enjoy over and over. The “versus” sub-genre of horror movies are usually over the top affairs that sometimes make no sense at all. Credit Justin Timpane for taking that last sentence and having some fun with it. 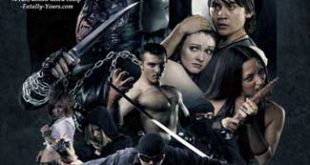