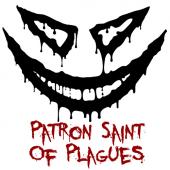 How do you incorporate horror into your lyrics?
All of the songs are presented in a horror anthology style, reminiscent of Tales from the Crypt or the Creepshow movies. Each song has its own terror motif anywhere from werewolves and zombies to murder and demonic possession. As the stories progress, and the body count climbs, the characters and plot lines start to intermingle. These short stories work together to build an alternate reality. A horrific world full of genetically spliced creatures, and psychotic bloodthirsty demons called “The Dark Place”.

What musical artists influence your sound?
We’re definitely influenced by a lot of the other horror based bands around us. Murderdolls, Misfits, and Zombiesuckers to name a few. That being said, influence can come from anywhere and we’re known to draw ideas from Industrial to Blues music. Just about anything dark that manages to catch our short attention spans!

What can fans expect to see at one of your live shows?
Violence, insanity, and blood. A lot of blood. It’s like a twisted, dark carnival.

How would you describe your fans?
Our fans are a swarm of vermin reminiscent of the plague bearing rats from the 1300’s. They colliding together and scream in unison like some kind of demonic mass. They feed off of us, and we in turn feed off of them. It’s definitely a very symbiotic relationship. They are, after all, the Infected.

What song in your catalog holds your favorite concept?
Right now I think my favorite concept would have to be the song “Scarewolf”. The spirit of a werewolf was cursed before it’s death, and was confined for all eternity to the body of a scarecrow. When the moon is full it transforms into a scarecrow-werewolf, and a massacre ensues. The tricky part is neither the families of the victims, or the wolf itself are aware that the beast is trapped inside of a scarecrow. Even if they were to figure it out and burn the body, the spirit of the creature merely shifts into the next closest scarecrow. So the bloodbath continues forever.

I immediately call for the banned of all scarecrows.

What’s your favorite monster?
The monsters that live inside of every person. The dark thoughts, and distorted whispers that push us to do terrible things. Without those monsters, the monsters from the stories could never exist. I think that the imaginary monsters are just a way for us to romanticize the darkness inside all of us.

If you could match up any one of your songs in any horror movie old or new, what song and what horror movie?
I’ve always felt that the song Haunting would have gone well in the first Saw movie. It’s my favorite horror movie. When I watched it for the first time it completely changed my perspective on writing, and psychological horror. The song is centered around this eerie, distant piano riff that’s contrasted by overly distorted synths and heavy kick drum. The music that Charlie Clouser composed for the movie was a big influence on my instrumentation.

Do you have any interesting on stage or back stage moments that can share with our Horrornews.net audience?
Our album release party, known as CreepFest, was completely doused in insanity. The singer from one of the opening acts broke his wrist on stage. I made a bad batch of fake blood, and poured it on a fan making the stage and pit sticky as hell. DeadBoy (bass) fell off the bar and nearly landed on one of our fans. Someone even ended up having to go to the hospital halfway through the show because they were rocking out so hard. It was definitely a fright to remember!

Do you believe in the paranormal?
Of corpse! My apartment, or should I say Crypt, is haunted by the ghost of a lady who was hung in one of the closets. I’m not sure if it was suicide or murder, but she whispers to me in the dark. She also likes to play pranks on visitors by moving their things when they aren’t looking, or making them trip over objects that aren’t there. Her and I play Ouija board together on particularly dreary nights.

What next for PSOP?
We put out a new full length album on Friday the 13th, so we’ll be travelling around promoting and playing to support its release. We’re also finalizing details on endorsements with several wicked companies who we’re scary much looking forward to working with. We intend to keep spreading our music and infecting people one by one, like the bubonic plague.