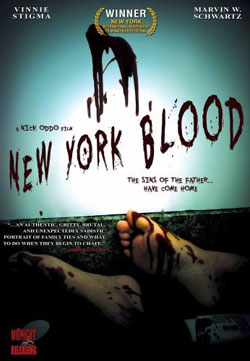 Drug dealing mobster Vinny (Vinnie Stigma), who owns a neighborhood whorehouse, wants to take care of his father, Lorenzo (Marvin W. Schwartz) a convicted murderer just released from prison. But things just don’t work out. The sins of the father and violence of the son overwhelm good intentions and lead to a blood soaked finale.

The sins of the father.. Have come home.

A typical Mafioso experience with a visceral surprises. Our film titled New York Blood is a new low budget production from Midnight releasing. Upon viewing this film something occurred to me. Which was horror takes many forms but is easily disguised if wrapped around a different picture. In the spirit of “Scarface”, “Good Fellas” and other Italian mob pictures its easy to overlook the obvious. That the amount of killing is easily comparable to a serial killer or slasher film It all comes down to just the way its presented. This film presented itself like any other homemade movie due to its SD look and lack of cinematic toning. That first impression can often ruin a good film or at least one that’s got alto going for it. So I overlooked those issues to see where this film took me.

The film stars Vinnie Stigma, guitarist of the legendary hardcore band AGNOSTIC FRONT who works for the part nicely although decorated with more tattoos than you’d expect seeing on an Italian crime boss.

An Italian neighborhood, crime, drugs, hookers, good food and alot of accents galore. We are right in the heart of a mafia film or Italian crime drama, Only this time the violence is revealed in a different way. Our main character Vinnie (Vinnie Stigma), receives word that his criminal father Lorenzo is finally being released after a 12 year stay at Sing sing. In effort of “doing the right thing” he picks his father up, brings him home and tries s to help him get back on his feet. Lorenzo seems innocent enough. Older, fragile and happy to get out of prison. Though looks can be deceiving.

Vinnie runs a prostitute ring, is preparing to open up a strip club and deals drugs on the side for extra cash. All the makings of a bad dude. His father is required to look for work while tying up loose ends. This is where the films starts to turn. His fathers first area of business includes taking care of the rat that put him in prison to begin with. And taking care he does. With brutal mafia style vengeance, Lorenzo locates the rat, ties him up, beats him to a pulp, pours bleach down his throat, carves his eye out and then stabs him to death.

Not bad for an old man and pretty horrific to watch. Though at this point I’m thinking, well that was pretty unnerving but does that make this a horror film? Let’s just say the father starts nosing in his sons affairs and in turn starts killing off folks with the ease of a priest handing out wafers. Vinnie trying to do right, puts up with his fathers lunatic moves but begins to regret it as it effects his business , his employees and his relations in town.

The father seems to get himself over his head and solves it by killing everyone and cutting up the bodies into tiny pieces. At this point the film has jumped from a mafia film into cold hearted slasher fare. A nice alternative to the usual run of things. The film seems pretty well cast an the actors are believable in there roles to provide a nice background of gritty urban NY street life.

I did enjoy the film even though it suffered from audio levels jumping, death scenes that could have worked better with cleaner editing and the obvious video look of the film. Tthe story worked and rounded itself out nicely. The film though only lasts 58 minutes which might be too short to be marketed as a regular release, though The DVD is loaded with all kinds of extras that round out the package. Directed by Nick Oddo, I think he’s got the knack for putting together a good flick. With some deeper budgets it will take care of the low production look and get his films to where they need to be.

Some of the scenes were violent enough to match any horror film chaos, so in overall it was a tight story with pretty sadistic moments. I’d say check it out! its loaded with intense murder flair and some grisly torture moments that make it film to watch. New york Blood is a deadly mix.