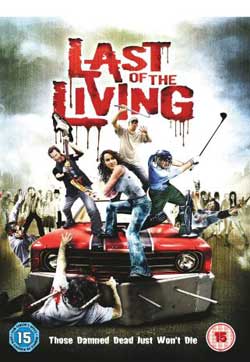 A highly contagious virus is spreading throughout the land. With one bite, it’s only hours before victims will turn into zombies and hunt for human flesh. Morgan, Ash, and Johnny might just be the only humans left, but they don’t seem to mind and find enjoyment lounging around in their underwear living in vacan’t homes. When they stumble upon a hot girl who just may have a cure, the three decide it’s finally time to step up to the plate and save the world- and the girl. Now the only hope for survival lies in their hands.

The zombie film has been done to death lately. I LOVE ZOMBIES……but, I have seen enough crappy zombie movies (Day of the Dead remake comes to mind) to sour me a bit on the subgenre.”Last of the Living” came from out of nowhere, actually it came from New Zealand, and it’s a really fun movie.

What it lacks in budget, it makes up for in heart. It could have been a classic if only it had a larger budget to work with, director Logan McMillan has style and vision which puts him ahead of the game and someone to watch out for in the future. Morgan (Morgan Williams), Ash (Ashleigh Southam) and Johnny (Robert Faith) have been living the high life. Living In mansions, watching movies, and playing video games consumes their time. The only problem is, for the past six months, the world has been overrun by zombies. They adapt their way of life to accommodate their current situation and everything seems great.

They want to find themselves some ladies, especially Morgan who is a bit of a player. With the world in the state that it is in, a shortage of candidates is expected. Ashleigh is the sensitive, overly cautious one while Johnny is the wild card, the rock and roll fighter. The only time they leave is when they need supplies or get bored, so they stock up and move to the next mansion.

The story kicks into gear when they meet Stef (Emily Paddon-Brown), a lovely young scientist who may have the key to finding a cure. They have to help her get the sample ready and get it to an island where there is a medical facility waiting to process it. Of course, things don’t go as planned and they have to do anything they can to get the blood sample into the right hands.

At first, I wasn’t too sure about where the story was going and some of the banter between our three couch potatoes was a bit much. Once they ventured out of the mansion and the story begins to unfold, I began to find myself invested in the characters. There was a true relationship and bonding between these guys and they made the zombie slaying fun. As weird as it sounds, I have imagined myself in the midst of a zombie outbreak and this is how I thought it would be. Keep in mind that this was a micro-budgeted film so I am sure some liberties had to be taken.

It was a bit skimpy in the gore department which was a bit disappointing . There was no gut-munching or brain eating so it left me a bit dry in that department. We do have a couple exploding heads and some bashed in skulls that work really well. Maybe it was just me but there never really seemed to be enough zombies. I don’t know if it was because of budget constraints or if it was just supposed to be a smaller town. It didn’t hurt the film, just was hoping for a bit more. The movie’s soundtrack was pretty badass. There was a lot of rock and roll, a little punk rock, and a really great score that grabs your attention right away. Director McMillan is a confident director, everything was well planned out and served its purpose. The editing was tight and fast paced and had some great photography, including some aerial stuff when our heroes are in a plane. 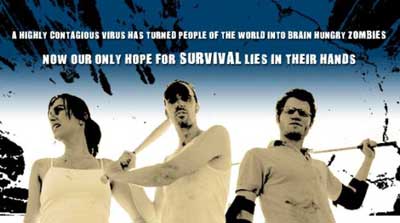 “Last of the Living” focused more on character than gore. Luckily for us, these where an interesting group of characters and we are given a close look at their lives and how they bond in a world full of flesh eaters. I can’t imagine a better cast and McMillan has an eye for talent. New Zealand has always been a breeding ground for talent and I hope this group goes places. I will be watching out for McMillan’s next effort, especially if he is given a larger budget, he may give us a classic yet