Bill Oberst Jr. To Play Demon Opposite Robert Loggia in THE LAST SUPPER 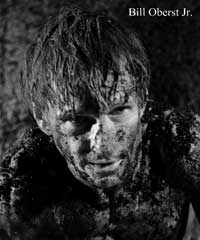 Fresh off back-to-back lead roles in The Asylum’s ghost flick A HAUNTING IN SALEM and Drew Daywalt’s 18th-century horror film NAKED, actor Bill Oberst Jr. has been cast as a demon in the upcoming feature film THE LAST SUPPER opposite Oscar-nominated veteran actor Robert Loggia.

The film relates the Biblical story of the Last Supper as told through the eyes of the Apostles. Gabriel Sabloff directs from a script by Tommy Blaze. The film shoots this month in Los Angeles. THE LAST SUPPER is produced by David A.R. White for Pure Flix Entertainment, whose founders include singer and actor Randy Travis. Robert Loggia plays the Apostle Peter, who narrates the film. Oberst was tapped by casting director Billy DaMota, CSA to embody the role of the ageless demon who appears to Peter in one-on-one scenes with Loggia.

Loggia, who famously danced with Tom Hanks in BIG and was nominated for an Academy Award for his role in THE JAGGED EDGE, has over 200 film and television appearances to his credit including SCARFACE, INDEPENDENCE DAY, the Oscar-winning PRIZZI’S HONOR and hundreds more stretching back to 1956. Loggia has worked in every conceivable genre of film, including a horror turn as a mob boss who becomes a vampire in John Landis’ 1992 film INNOCENT BLOOD.

Oberst, who played Jesus Of Nazareth for 10 years in a touring stage ministry before becoming known for darker roles in film and television, says he is glad to be a part of the project. “I believe demons are very real,” he says “so playing one is a heavy responsibility. And acting opposite Robert Loggia would be an honor for any actor. I’m a lucky guy and I’m excited.”