Home | David Rutsala takes his ‘Days of Grace into zombieland

David Rutsala takes his ‘Days of Grace into zombieland

New York screenwriter David Rutsala takes his first step into international film-making with his co-writing credit on the feature “Days of Grace” (Dias de Gracia), screening this month at the Cannes International Film Festival. Set against a the back drop of the World Cup, this nonlinear thriller takes the viewer into the world of Mexican drug trafficking and kidnap squads.

“This isn’t just your usual gimmicky nonlinear crime film,” Rutsala says. “This is the real deal. A crime film with a capital “C”. It’s visceral. It drops the veil on the criminal underworld in modern day Mexico City, And it makes ‘Traffic’ look like a kids’ film.” 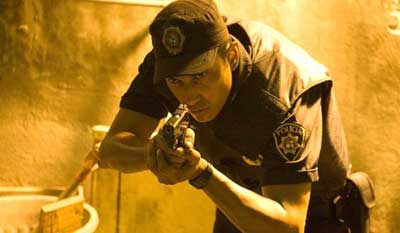 Industry mavens say Rutsala is the “real deal” as well. Although he isn’t a well known name in the industry yet, he’s racked up an impressive list of employers on the development front. From large studios like Columbia to small shingle’s like New York’s Curious Pictures.

“I’ve loved working in development,” Rutsala admits. “But it’s a little like being a spy. You can’t say what you’re working on. And no one really understands what you do for a living, or how you pay the rent.”

Rutsala is attempting to leave the clandestine world of development by taking over the producing reins of his next project: A zombie film he wrote called “Z-Day”. At first blush a zombie film may seem miles away from the gritty realism of “Days of Grace”. But Rutsala begs to differ.

“Yes, this is full on Zombie film. And we hope it’ll be as exciting as any zombie film. But it’s also a serious picture. A political picture. And it explores one of the hottest issues of our day: Immigration.”
Although “Z-Day” is in the early stages of pre-production Rutsala’s production schedule remains hectic. In addition to the aforementioned projects, Rutsala is also developing several tv projects, and putting the finishing touches on a spec script which he describes as “the picture people have been wanting me to write for years”. And Rutsala has apparently done this all without an agent.

“No, I’ve had agents in the past. And management,” he counters. “I’m currently fielding offers from agents again. But, in this day and age, agents can’t make a career. You got to get most of your jobs yourself. In fact, I think that’s one that makes me attractive to agents. I can get jobs myself.”