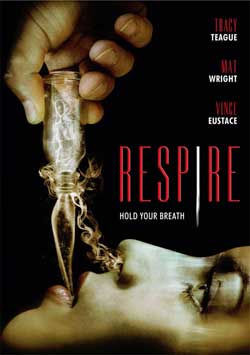 A scientist by the name of Randolf Kaminsky discovered a way to cure almost every disease known to man back in 1936. And just what was Kaminsky’s medicine of choice, the last breath from a dying person. It seems so easy of course, simply inhale the last breath and instantly anything that was ailing the patient was removed, everything except the dying persons memories that is.

Respire starts by doing a black and white flashback sequence set in 1936. A scientist by the name of Randolf Kaminsky comes crashing into his house and informs his wife that it is time for them to go. It isn’t even a few seconds before there is a knock on the door and someone shoots the scientist. Kaminsky’s wife immediately pulls out a small jewelry box and forces her husband to drink a blue formula, I say blue because everything else is in black and white, and obviously David A. Cross wants the viewer to notice this formula.

Mrs. Kaminsky then proceeds to collect her husbands dying breath in a vial, the breath is shown throughout the film as a black cgi mist. She puts the vial back into the jewelry box and skips town immediately going to the Soviet Union. While she is there she is suddenly attacked and killed by Nazi soldiers and once again the box goes into someone else’s hands. The film then proceeds to follow the box over the next seventy plus years by showing everyone who has owned it from a group of hippies who use the box as an incense burner to a modern day boyfriend giving it to his girlfriend. The credits for the film play over the sequence and it’s filmed really well.

Finally after the credits the film moves into modern times and we all learn that a woman named Susan Jordan now owns the box. Susan runs a second hand store and acquires quite a bit by using auctions. Her store only has one other employee and that is the somewhat nerdy Nina, Susan needs all of the help that she can get however since she is terminally ill to the point where her doctor informs her that she only has months to live. These beginning segments with Susan are kind of depressing, including a scene where Susan tells Nina that they need to start planning for when Nina has to start taking over the company. The box however sits gathering dust on a shelf behind the cash register with only the viewer knowing that it contains some sort of secret.

It isn’t long before a strange man named Raif Collins comes into the store and asks Susan about the box which has been on her auction site. Raif isn’t just interested in the box however since he also wants Susan to attend an auction and bid on a very old book. Normally Susan wouldn’t do such things but the money that Raif offers is just too much. It is while Raif is making his offer that Susan notices that a man named Alex Poe has also started to bid on the box online and once again is offering quite a handsome sum. Susan cancels Poe’s auction and sets the deal with Raif who immediately writes her a check.

Intrigued by the box and the book Susan begins to do some research of her own and discovers the past of Randolf Kaminsky and his ability to cure diseases. With all hope lost Susan attends the auction where she meets and outbids Alex Poe for the book. When she arrives home she finds that hidden under the cover of the book is the key for the box’s secret opening. She opens the box and finds a small vial that looks as if it doesn’t contain anything. She breaks the wax seal of the vial and inhales its contents then goes to bed. When Susan wakes up the next morning she finds that she is incredibly healthy, to the point that she even goes to her doctor to have tests done. There is only one side effect it seems however to Susan’s miracle cure and that’s the strange flashbacks (which create some pretty good jump scares) and the fact that she suddenly feels the urge to write strange formula’s and draw pictures of strange houses. 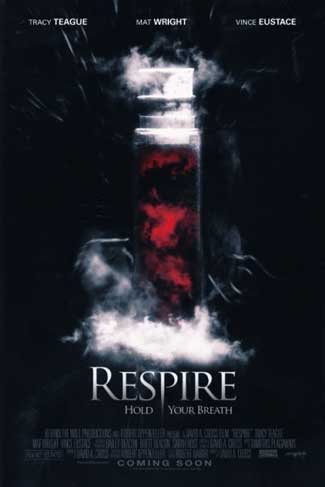 Vampires are big business these days in the genre market and David A. Cross sends up a “vampire” story with Respire, but without the fangs and poet shirts. Kaminsky’s cure does work, a little too well since it also grants those who use it with immortality. Users of the medication can be killed; however they have to fight a “rage” that builds up in them. This leads through many tosses and turns during the film where at one point I was confused as to whom the good guy was and who was the bad guy, and this isn’t a bad thing at all.

Respire will keep you interested and holding your breath up to its dramatic climax in which an entire small population suddenly now has the “rage” and begin attacking anyone and everyone who is near them. This sets up a pretty decent gore score for those who want to keep count as we are treated to a character being force fed broken glass which an alcohol chaser, more stabbings and bludgeoning than you can shake a stick at, some eye gouging, fingernail ripping and even a scene involving a drill and a persons exposed brain. 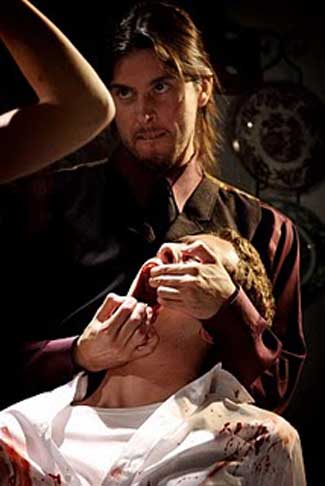 Respire latches on with these scenes as the pay off and lets the rest of the scenes build up to them, which just makes the whole thing that much sweeter. Fans of the vampire should at least give this one a view, it’s literally breathes a new breath into a stale genre. 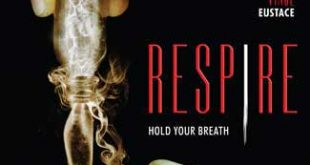