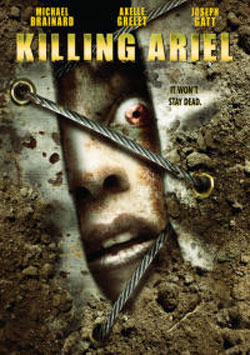 Enchanted by lusty she-demon Ariel (Axelle Cummings) and lured to a remote house for a weekend of passion, happily married Rick (Michael Brainard) tries to break free of the evil spell by killing the succubus, only to have the demon rise from the dead to keep him ensnared. Time and again Rick slays Ariel, who simply returns to life to continue her game. How can Rick escape a supernatural creature who refuses to die?

Killing Ariel…My mind was taken back instantly to fond memories of a film by a similar name of “Killing Zoe”. Though in this case, no relation. While many parts of this film fall into “that” dream within state of confusion….. especially with several scenes of our main character waking up, waking up and then waking up again…it does combine quite a few thrills that made the film rather enjoyable. It has humor, mystery, horror and a pretty involved storyline.

To start off, we are plunged into the life of Rick (Michael Brainard), the insurance salesman who has plenty of opportunities to be tempted by the perks of his lifestyle. Regardless, Rick remains true to his marriage and family and is able to fend off these advances. Or so it seems.

To step back even further, Rick suffers from the extreme child hood trauma of seeing his family fall apart and then commit suicide before his eyes. At present he is in the office of his psychiatrist trying to put the pieces together. He explains that while his father suffered from a crippling ailment that left his legs useless (and other parts we assume), his mother was off indulging with strange men. Particularly one man who Rick refers to as the Incubus. This Incubus, a bald headed rather unusually hermaphrodite looking fellow haunts Rick in reoccurrences throughout his child hood.

The incidents themselves are not quite clear from the get go as to there true nature of being hallucinatory or supernatural. Whatever the case, this Incubus has a purpose that extends far into his adulthood.

Now switch gears to Rick heading off to his old childhood estate currently up for sale for a weekend getaway with the rather sultry Ariel (Axelle Cummings). Whatever subdued temptations Rick restrained from in the past are clearly in full motion now. The weekend goes as expected. They have several affairs, laugh, play and enjoy the time together.

The tables turn when Rick starts slipping into reoccurring dreams that take their toll on his sanity. After several of these reoccurrences, he accidentally kills Ariel when he mistakes her for the Incubus who has returned to haunt him. Easy enough, though he keeps waking to a renewed Ariel fully in tact. At this point you almost imagine Bill Murray reliving his “Ground Hog Day” cycles combined with a hint of Ash from Evil dead as Rick continues to kill Ariel every chance he gets. This si actually the fun part of the film which the filmakers dont spare any chance to provide a sense of humor to.

Upon several unsuccessful attempts, Ariel warns him that he is messing with the wrong demon. Apparently he is as he is suddenly catapulted into old age. An asylum, a pair of kids grown up and the memory of a wife who is long gone. This isn’t the ending, however you can see the mix of plot points that change gears through out. I think in retrospect the film provides reveals in reality that coincide with
Rick’s level of sanity …though those reveals are still not entirely resolving.

In summary, I can only point out the facts and let the outcome left to the viewers.

Ariel is a demon and the Incubus in different form.

Rick has become possessed and because of it has given into his emotions and affairs with other women.

His family is cursed by this re-occurring demon.

Rick is mentally unstable and has spent the better portion of his like in an insane asylum.

The dreams are part of the demons trickery, which includes a slow decent into madness.

Rick “may” have been hallucinating portions of his reality and committed crimes as a result.

This film felt very much like an episode from the tv series “Supernatural” but still has character and a sufficient level of entertainment value. The plot while very segmented still circles into enough pieces that can be put together for intelligent viewers. In all it kept me glued to the very end, which whatever you make of the story still accounts for something special. Also it should be added that the appearances of the Incubus (Joseph Gatt) are very effective and chilling for their intention. Directors Fred Calvert and David J. Negron Jr. have culminated an effective effort that surpasses independent productions of its kind. A pretty cool flick that I’d watch again.