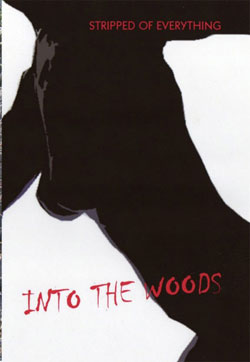 Danielle is stuck in a dead end relationship with a married man. It takes a turn for the worse when he leaves her and then comes back and brutality rapes her. She is an avid runner and has always run away from her fears and lack of a happy successful life.Her life, which has turned upside down, has just got worse. On one of her runs, she mysteriously turns up in a place unfamiliar with her. ON a lonely stretch of Beach near an equally desolate unrecognizable Forest. Stripped of everything she wakes drugged and lost in the woods. With a few clues and constant torments. She runs from an unseen character that little by little reveals his intention and who he is. When she returns to reality, an explosive climax ties up all loose ends and conflicts.

Into the Woods is a low budget thriller created by Phil Herman. Danielle (Nancy Feliciano.) finds herself naked and placed deep within the woods upon waking one morning. As she comes to and begins here journey out she finds notes along the way giving her instructions to follow. Upon flashback, we find that she had just ended a relationship with a married man not content on simply going away who she quietly informed his wife about there affairs.

“Into the woods” lacks pretty much alot of cinematic treating that we are used to seeing. Filmed with handhelds, laughable acting and below average editing, it is truly an independent low grade release. I will confess I had a hard time staying focused and completing the movie. The trodding through the forest again and again put me to sleep pretty fast. We are given alot of the back story per way of flashbacks which does break up the monotonous forest trailing.

However, with a park so open and trailed, it seemed like it would have been an easy call to find ones way out. My choice would have been a more secluded forest area without so many open fields., The dude laying on the ground talking on the cell phone was a bit to much for my knack as a viewer. There were alot of flubs in this film that could of used more effort to make more realistic. For one, every time Danielle is seen tied up naked, you see closeup of her hands basically holding herself up. At least tie a knot or use some fake handcuffs for God sakes.

These kind of details are overlooked, but end up being points against an already poor production. Director Phil Herman plays the part of Charlie, which spells it out pretty clear….he can’t act, and therefore can’t direct as well. Darla Doom who takes the best friend role of Judy, screams into the phone, never leaves the couch and sounds like she’s reading from cue cards than an actual phone conversation.

Another annoyance was the sound was god awful. The levels would jump, then drop, then come back with staticy backgrounds. I know sound is hard to control, but this element of filmmaking can ruin an experience for viewers and cheapen the production, in which it has. My recommendation here is to go back and do a mix overview with equal levels throughout. It appears that the film is focused on selling the nude aspect rather than just selling the story, as it cuts back and forth to naked female, story, dude-ass, story, more dude-ass, story, boob-shot.

That’s one too many dude-ass shots for my liking. What else….well we have a rape scene that asks the question…wouldnt you call the cops after that rather than brushing it off and knowing who it is? Maybe you should lock your doors? Maybe its time to drop the boyfriend/raper a little more aggressively? These are all plot holes that fall thru and don’t work on screen. It began to feel more like an excuse to show Danielle naked than to actually shows us a movie.

A few plot twists are thrown in to mystery it up, but they fall a little flat. I think at this point you don’t really care about them and just want to see Danielle get to the other side of the forest, so the movie is over.

All in all my hope would be that this is a rough mix rather than the final. There’s alot of cleaning up to do to appeal to the markets. If anything I’d re-look at all the pieces, plug the holes, clean the audios and maybe look into some color timing to lessen the obvious video 30fps camera look. With the increase in films being made due to easily accessible camera and editing suites, sometimes folks are a bit too eager to see a final mixed before really stepping back to take a look at the actual product. This is not a good product…sorry. So in the interest of advance screeners, I would say, take your time , fix the product and then pump the marketing on it. “Into the woods” for now will have to go into the bottom of the stack. 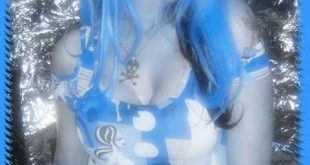