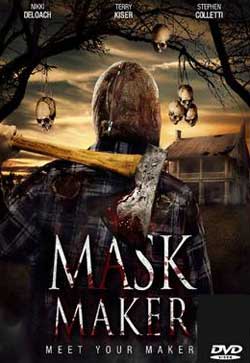 Evan has the perfect birthday present for Jennifer, his investment-minded girlfriend: a sweet old fixer-up home with a lot of land he bought for a steal. But the home has a deadly history that the locals know all too well, a history they refuse to speak of. Evan, Jennifer and their friends, who have arrived to help celebrate Jennifer’s birthday, are about to learn it for themselves.

Best line of the movie: “Smells like Satan’s balls in here.”

Thoughts:
Mask Maker is a movie you’ve seen before…almost. It takes a big bite out of the classic slasher genre and has all the trappings you’d expect: college aged characters played by bona fide grown-ups, a soulless, and faceless (literally) killer, and a predictable storyline. It had plenty of good kills in all the scenarios in which you’d expect to see them: after sex restroom break, after sex restroom break “hey you’re not my boyfriend” wearing only panties and a skimpy top, naked in the bathtub, etc. It even took the “if I wear the killer’s mom’s clothes I can trick him into thinking he doesn’t really want to kill me” thing from “Friday the 13th Part 2”. But in spite of those things, it also had some nice touches.

While it is “College Friends Vacationing in Slasherville”, the college friends are post-grads so we’re spared the juvenile banter that fuels such movies. They’ve already done the Spring Break, get drunk and have frivolous sex thing, and are now poised to face life in actuality. This is refreshing to watch. The screenwriter, Eric Miller, did really well in this arena, writing a script that didn’t make me think I somehow missed out on an entire era of my life by not experiencing the party days of moron college students (though, now that I think about it, maybe seeing them get eviscerated is part of the appeal of these movies to begin with). Contrary to the norm, the dialogue here is natural and unobtrusive which allows the actors to develop their characters organically. It’s almost like watching “The Big Chill”, the dialogue and the character relationships are that good. Actually, it’s like watching the love child of “The Big Chill” and any number of slasher icons over the years, specifically Leatherface (the use of other people’s faces), Michael Myers (impossible to kill), and as mentioned before, Jason Vorhees (dead mother vengeance). I suppose if you’re going to so liberally borrow (steal?) from horror icons, those are the ones you’d want to choose. I think my problem with it is that it comes off like they watched “Behind the Mask; The Rise of Leslie Vernon”, used all of his rules and made a movie. I was reminded of this movie when the Mask Maker easily caught up to his sprinting victims time and again with no more effort than a briskly paced walk.

Mask Maker is no doubt a well made film. It’s shot well, casted well, and the special effects are up to par with anything out there. Even the soundtrack is well done. I can also gauge how much I’m enjoying a movie by noticing the times I cry out, “NICE!” in reaction to a particularly gruesome kill or well placed “Gotcha!” (that’s what I call those moments in a horror flick that make me jump out of my pants. It comes from the old Jabberjaws cartoon with the shark that didn’t eat people, just scared the crap out of them by jumping out of the water and yelling, “gotcha.” What a great cartoon that was…), and I cried out, “NICE!” on a couple occasions. I only hope the same group of writers, actors, and crew members will come together again and do something more original. We’ve seen this one before.