Home | Get your Dinocroc Gator on – To arrive on Bluray!

Get your Dinocroc Gator on – To arrive on Bluray! 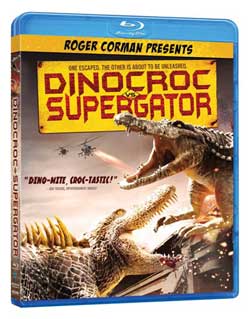 The Showdown Begins July 12th on Blu-ray™ and DVD

Monster smackdowns are as old as the movies themselves. Frankenstein vs. The Wolf Man. Godzilla vs. King Kong. Billy the Kid vs. Dracula. Freddy vs. Jason. But now Anchor Bay Entertainment proudly unleashes the ultimate Monster (S)Mash: Dinocroc Vs. Supergator, from Oscar®-winning executive producer Roger Corman. Dinocroc Vs. Supergator reunited Corman with cult star David Carradine (Death Race 2000, Kill Bill), in one of his final performances. SRP is a bite-size $19.98 for the DVD, and a tasty $24.99 for the Blu-ray™, with pre-book on June 15th.

Scientist Jason Drake (Carradine) has been holed up deep within a secret island laboratory of an unscrupulous biotech corporation. Doing what? Meddling with the laws of nature, of course! When he turns his attention from mutating fruits and vegetables to alligators, crocodiles and dinosaurs, something’s bound to grow to horrific proportions – and escape! Now, two of his most terrifying creations are loose on a tropical island paradise. Bullets won’t stop them. Explosives only tick them off. And their ravenous appetite for scientists, tourists, mercenaries and swimsuit models keeps growing.

In pursuit of the scaly beasts are an undercover investigator (Corey Landis), a sexy Fish & Game officer (Amy Rasimas), and a cold-blooded swamp hunter known only as “The Cajun” (Rib Hillis). But how can they stop two forces of perverted science that can outrun SUVs, crush buses, and snack on sleazy producers in hot tubs? When these monster lizards ultimately meet in battle, will mankind be the defeated species? Get ready for a bone-crunching, body-chomping, earth-trembling battle to the death!