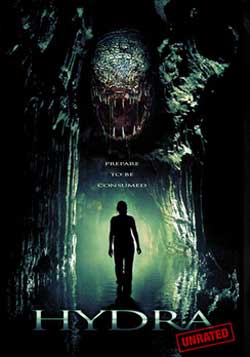 Several wealthy men travel to an isolated island to partake in a most dangerous game: hunting down four former convicts simply for the thrill of the chase. But little do they know that the predators will soon become the prey. When the mythical many-headed Hydra emerges, both the hunters and the hunted find themselves imperiled by the horrific beast. George Stults and Michael Shamus Wiles star in this Sci-Fi Channel chiller.

“It lost its head!” mutters our hero after a beheading and that is the mentality we have to deal with in the Sci-Fi Channel’s (or should I say SyFy) latest original offering “Hydra”. As much as these films try to be unique, it always ends up being the same thing. For every ten of these monster run amuck movies, nine of them make you want to claw your eyes out and one will blow you away. I am still waiting for that one because “Hydra” definitely is not it. While the film tries to take the formula of “The Most Dangerous Game” and mix in the Greek myth of Hydra, the result is as expected from the Sci-Fi Channel, rotten dialogue, horrible effects, and wooden acting. It’s a shame too, I liked the idea, but the end result is headed for the trash bin.

A group of four billionaires are paying the diabolical Vincent Camden (Alex McArthur) $10 million for the chance to hunt criminals, criminals who have a striking resemblance to those who have in some way caused the billionaires pain. Our four criminals are chained deep with the ship that is taking them to a distant, uninhabited island where the game of human hunting is set to begin. Things take a turn when one of the criminals, Tim Nolan (George Stults) is no criminal at all but a former Special Forces soldier with a vendetta against him and Camden’s right hand man, Captain Sweet (Michael Shamus Wiles). Nolan leads the group into the jungle when the hunters are close at their feet. What they don’t realize is that the mythical creature Hydra, from Greek mythology lives on the island and is ready to attack.

After I read the synopsis of the film, I was actually a bit excited. This film sounded pretty fun and I was hoping for some mindless entertainment. I guess I should have been a bit more careful in what I had wished for since what I ended up watching made me a bit nauseous. Screenwriter Peter Sullivan did his research on the myth, it just feels like he focused his energy there and not on character. It just felt like people in a situation, we don’t know these people, and just don’t care what happens to them.

We watch them die, in silly CGI ways by a creature with three heads, and if one is cut off, two more will grow in its place. The only thing that can stop Hydra once and for all is the sword of Hercules that has also made its way to the island. When we get to see the creature in action, I will admit to enjoying it, I laughed a few times, just not sure if that would be the proper response. Some of the location stuff looked good, but the photography on the high seas looked awfully amateurish.

Which brings me to the acting and it was bad, filled with wooden performances from the newcomers as well as the veterans. That tells me one thing, they didn’t have anything to work with or pull from. Alex McArthur, who was amazing in William Friedkin’s “Rampage”, is
just going through motions here, showing none of the promise he once had.

George Stultz and Dawn Olivieri have no chemistry together and I was never convinced for a second that she had supposedly killed her husband or never convinced that he was ex-military. The hunters are just there to fill the runtime with pointless scenes of them lock and loading weapons only to be dispatched moments later with no backstory explanation as to what had been done to make them so bloodthirsty in the first place.

“Hydra” was, for the most part, a waste of time. The good folks over at the Sci-Fi Channel just won’t learn and keep tossing this silly formula at us over and over again. While the effects seem to have improved, the overall quality of the rest of the film is still below average. If you find yourself suffering from insomnia, “Hydra” may be a good way to help you pass the time, or if you’re like me, it will help put you to sleep. View at your own risk. 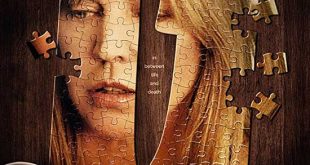