They say squatting is dead – a term that takes on a sinister double meaning when four homeless art students decide to take up residence in an abandoned London House where a hidden terror lurks.

“Spiderhole” is one of those films that is good, yet doesn’t break any new ground. It has an interesting premise and the film holds your interest, solid acting as well, but when things actually do get mixed up, the film ends. It happens all too often in horror films. That is actually a pet peeve of mine. I know that many films choose endings like that due to budget or time constraints, that’s fine and all, just remember not to leave the audience thinking, “That’s it?” The proper response should sound a bit more like, “Holy sh*t!!!! That was messed up!!!” The Spanish masterpiece “[REC]” was a film that left me with the former response. “Spiderhole” was more like the first. While things worked for the majority of the film, the last ten minutes just didn’t do it for me.

According to Wikipedia, “squatting” consists of occupying an abandoned or unoccupied space or building, usually residential, that the squatter does not own, rent, or otherwise have permission to use. A pretty harmless practice unless you decide to squat in the wrong place. In that case, you may end up following the fate of Molly (Emma Griffiths Malin), Zoe (Amy Noble), Toby (George Maguire), and Luke (Reuben-Henry Biggs). They are a group of art students who are homeless (we never really learn why) and on the lookout for a place to stay. They have their bags loaded into a van and are patrolling different neighborhoods until the find the perfect place. When they do, everything just seems too perfect. They unload their things and kick back in their new digs when they come across a bundle of bloody clothing. Everything is telling them that they should get the hell out, but for one reason or another they choose to get a good nights rest then bolt in the morning. When they wake up, their phones are gone and there is no way out. Someone or something wants them to stay, but what?

The first half of this movie is terrific. The setup is unique and I love the idea of them squatting in some random house. The cast is solid and though the characters are not too fleshed out, we do get a good sense of who they are. We even care a bit about them since they are written and portrayed believably. No time is wasted and we jump right in to the main story. The house where they take up residence is frightening and at the same time a dream home for a young group of college students. The suspense sets in and we keep guessing as to what will happen next once they realize they can’t get out of the house.

Where the film begins to fail is in the final reel, when we learn what is actually after them and its’ motivation. There is a minor subplot that is introduced in the opening frames and had they chose to explore that as the main nemesis then maybe I would have enjoyed it more. Instead things begin to drop pretty predictably and I was really hoping for a satisfying conclusion. The film wasn’t overly bloody or gorey, a couple of satisfying moments do appear at one point.
“Spiderhole” is a decent film and there is plenty for one to enjoy. Writer/director Daniel Simpson has a solid take on his material. For a first time feature, he fared better than most will. With a unique approach I just felt that the finale should have been just as unique and shocking to boot. When the shock does appear, I felt it was too late. When watching, I kept thinking to myself, this scene would have been a good place for a curveball, instead what followed was always predictable. “Spiderhole” offers nothing new and mostly predictable, but the acting and the setup are terrific, so if you’re looking to be entertained, don’t expect too much, and this one could be enjoyable. 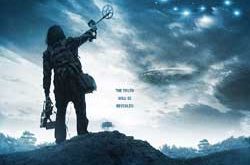