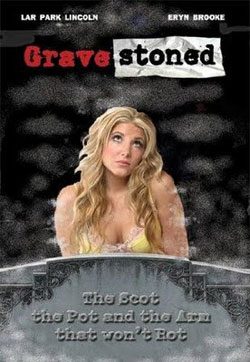 Two stoners decide that they want to break into the movie business. They end up cutting the arm off of a real corpse to use in a horror film because the director wants the prop to look realistic and refuses to use a fake one. Unfortunately the reanimated cadaver eventually comes looking for its missing limb and “wackiness” ensues

I knew within about five minutes of watching “Gravestoned” that I was going to be in for 92 very long and painful moments and I was correct. Have you ever known anyone who just tried way too hard to be funny and as a result they failed miserably? You have? Well that’s good, because that pretty much sums up this movie. It isn’t funny in the very least, it provides no scares, and it really has no entertainment value at all. Believe me when I say that the makers of “Gravestoned” now owe me the 92 minutes of my life back that I wasted watching this horrible mess of a film.

At first glance I thought that it was going to be a fun ride and I was actually looking forward to watching it. I thought the zany plot sounded like something only the guys at Troma could dream up and popped it in my DVD player with pretty high hopes that I was in for a wacky good time. I now feel that I owe the guys at Troma an apology for even thinking that “Gravestoned” was comparable to any of their films. Most Troma movies are enjoyable while this film was just plain horrible. Seriously folks, it is painfully bad and I would even place it in the same group as “The Pelican Brief,” “Armageddon,” and “Con Air” as one of the worst movies I have ever seen.

Why did I think it was so bad, you may ask? Well to be honest with you there was so much wrong with it I’m not even sure where to begin. For starters, there is not one funny moment to be found anywhere. It is supposed to be a comedy (I think) but there wasn’t even an instance where I chuckled, much less roll on the floor laughing so hard I nearly pissed myself. The humor is more like a Will Ferrell or Jim Carrey movie as it isn’t remotely funny and is more silly and obnoxious than anything. I think that there must have been a lot of in jokes that were only funny to the cast and crew, but for me I thought that it was as about as funny as an episode of “Murder, She Wrote.” I even watched it with a group of friends and we spent most of the time groaning at the “funny” scenes as opposed to laughing at them. I guess the bottom line here is that this movie is as funny as Nicolas Cage is talented (and for those of you keeping score at home, on a scale of one to ten that is somewhere in the neighborhood of around negative thirty).

The characters are annoying and I had trouble liking any of them. None of them could really act at all and I think that I have seen better performances at a couple of middle school plays that I’ve attended. As I’ve said time and time again bad acting doesn’t necessarily ruin a movie for me, but when it comes to “Gravestoned” I’m willing to make an exception (not that the horrible acting was the only reason I didn’t like it). I actually felt bad for Lar Park Lincoln. She goes from a “Friday the 13th” movie to this? What in God’s name did she do that was so horrible that she had to be punished by being in this movie?

The film had a very amateurish feel to it and looked like it was made by a couple of high school kids. The writing is bad, the camera work is shoddy, and most of the scenes go on for way too long (to the point that I almost fast forwarded to the next scene countless times). The special effects are cheap-looking and poorly done, and the zombie looked like a bad Halloween costume someone bought at the Dollar Store. I realize that this is a low budget film made by a group of mostly non-professional filmmakers, but even taking that into consideration I still thought that it was just terrible.

I always try to find something positive to say about a movie no matter how bad it was, and that proved to be a challenge for me in this instance. I wracked my brain trying to think of something I enjoyed about it and all I could come up with was that I liked the dog (who was probably the best actor in the entire film) and most of the women were nice to look at (I don’t know for sure but I’m going to go out on a limb and say that some of them were local strippers recruited by the filmmakers).

I wanted to like “Gravestoned,” and for the first couple of minutes or so I tried my best to overlook how bad it was but I just couldn’t do it. There may be a few people out there who enjoy it, but I think that the majority of viewers will dislike it as much as I did. The fact that I was able to finish it is nothing short of miraculous and if I was given the choice of watching it again or getting a root canal I would gladly undergo the dental work (as I am sure it would be less painful). I wouldn’t recommend it to anyone unless you want to see it just so you can see how terrible it is for yourself.