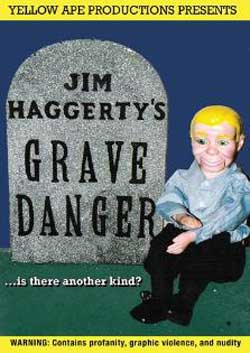 A woman is terrorized by a psychotic caller who terrorizes her with terrifying tales of murderous ventriloquist dummies, possessed housewives, and watching strangers. But will she live to tell the tales?

“Jim Haggerty’s Grave Danger” is an exercise in the do-it-yourself school of low budget filmmaking. What it lacks in originality, it makes up for in fun and silliness. This film has a bit of everything, senseless violence, wooden dummy acting, a wooden dummy, a former Playboy Playmate, and plenty gratuitous nudity. For the most part, this is a winning combination and makes for a fun film.

The film starts out like a “Scream” clone, a woman is being tormented at home while speaking with a stalker on the phone. He is watching her from somewhere and wants to tell her a story. The movie itself is an anthology, which I wasn’t expecting but pleasantly surprised by. The first story is about a man who is being followed by a man in a tuxedo who has vowed to kill him, but the people around him cannot see the man. The second story is of a housewife whose abusive husband sends her out to buy a gift for a friend but comes home with a relic that turns her into a murderous vixen, and the final, and most entertaining, story follows a down on his luck ventriloquist who uses his dummy to seek revenge on the people who wrong him. When watching a film like “Grave Danger”, I tend to lower my expectations as low as I possibly can. When I do, I tend to enjoy the film a bit more and my strategy worked. While the wraparound story wasn’t quite as interesting as I had hoped, it did start out strong with the “Scream” type twist. Instead of talking scary movies, the assailant tells scary stories.

It leads us into the first segment with Victor, a young man who is being terrorized by a man in a tuxedo that no one else can see. The story was done well enough with some fun little camera tricks but I felt that this one suffered a bit from being too short and the ending wasn’t exactly satisfying. Jae Mosc as the terrified Victor was fun to watch and helped to make this segment as entertaining as it was.

When we go back to our wraparound segment, the caller has the victim tell a story this time. She tells the story of Carol, a house wife abused by her husband played by Vic Martino of “Sopranos” fame. He is hilarious as the jerk husband and actually makes you care a bit about her and how she is treated. Carol (Kate Webster) is told by her husband to pick out something nice for his client and comes home with some sort of African idol that she is mesmerized by. He flips out on her for buying something that he hates and she is soon possessed by the idol and begins to bring men home and kill them. This story is just fun to watch and Kate shows us her “assets” more than once and turns in a solid performance. But still, Vic steals every scene.

And our final story is about Abe, a retired ventriloquist who needs to make money in order to buy medicine for his ailing wife. His magician friend finds him a job at a party with a bunch of drunken rowdies that heckle, and refuse to pay him and Phineas, his nasty little dummy. Jenny, the heroine of the story, shows Abe an act of kindness which he appreciates, then sets Phineas loose to seek revenge and collect what he is owed. This was by far the most satisfying of all the stories. The acting was very good, especially that of Bud Stafford who played Abe. You actually feel for the guy and the revenge feels justified. That may be do to the fact that the villains of the piece were incredibly annoying. At the end of this, I wanted to know more about Abe, what was his story? That could be a feature film of its own. The wraparound story finishes itself off and we have survived “Grave Danger”.

While the film may not have been technically sound, “Grave Danger” and Jim Haggerty are able to show us that it isn’t about how much money you have to spend, you just need the heart and the drive to entertain and I had a great time. 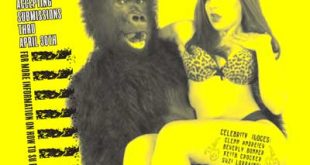