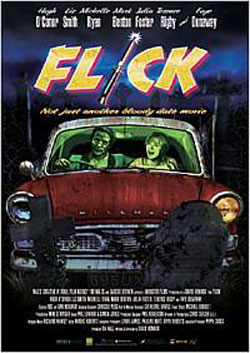 Memphis cop Lieutenant McKenzie is called in to investigate a series of strange deaths and weird sightings following the resurrection of a murder victim from the 1950s(a local boy) who is brought back to life in modern times and tries to find his teenage sweetheart who is now aged 62 and also to seek revenge for his death.

Johnny Flick Taylor (Hugh O’Conor) got his nickname per way of the old style flick knife he carries around with him. Shy, with a stuttering problem Johnny loves to dance. Tonight though he is determined to dance with the girl of his dreams Sally Martin (Julia Foster). As he approaches her in the local dance hall hangout, he fights off his nerves for the sheer pleasure of requesting a simple dance. “Sal would you like to dance with me?, just one dance and I could die a happy man” he exclaims and to his surprise she agrees.

Though the locals who laugh at Johnny do their best to embarrass and harass him to the point where he never does get his dance. Being the 50’s, things were a bit different back then. The situation elevates into Johnny taking out his knife and going hog wild on a few of the attendees. He grabs Sally, heads out in his car and accidentally runs off the road into the nearby lake. Well Sally survives but Johnny goes down with the ship. The event lives on though as a night to be remembered.

Zip into the present and the car is discovered while excavating the river. Johnny of course still at the wheel, dead as a doorknob. All the teenagers have grown and in there 60’s. Upon recovering Johnny’s body, they didn’t anticipate him coming back to life. This is where the fun begins. Rotting, slimy, voice suffered from necrosis and in full zombie mode, Johnny has returned to avenge his death and take care of unfinished business. This includes murdering off all those who kept Johnny from his dance with Sally. One by one they all suffer at the hands of an angry corpse.

Faye Dunaway stars as Lieutenant McKenzie who with her partner Detective Sergeant Miller (Mark Benton) are on the trail to find out who is killing off locals in Hobb’s End and where Johnny’s missing body traveled off to. To their surprise they didn’t anticipate them being one in the same.

The film is a light hearted horror comedy directed and written by David Howard. I was surprised not by the story but by the level of visual attention the film was given. The filmmakers on this one clearly had a vision and that vision works like a charm. For comparison you might point to films like “Night of The Creeps” “Sin Cit”y and “Dick Tracy” however only because it’s look and feel is done in a particular style. Orange tones are combined with red and green lit scenes giving it a surreal feel through out. Blood shots often hit the camera lens, fill the screen and erupt in a neon red. The camera shots were stylized by using alot of crooked angles, and scenes with askewed views. Add to that interludes of actual comic book pages which narrate short segments and you’ve got what makes up the film “Flick”.

The comedy is more from a camp standpoint than clever dialog lines that instantly retrofits the whole she-bang to a earlier times of filmmaking. Transitions are presented in an old school fashion using basic wipes and center wipes. Music is mostly 50s style used to accent the time of the the returned undead Johnny.

It’s pretty clever in its whole package and has alot of charm that separates it from other films. “Flick” is a one of kind! Smartly done and visually retro that’s full of flavor and zombie goodness.