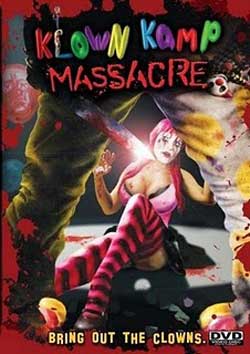 Fifteen years ago, Edwin went to clown camp to fulfill his lifelong dream of bringing laughter to the world… but nobody laughed. Humiliated on graduation night, Edwin viciously murdered the entire camp before vanishing into legend. Now, despite the warnings of the town drunk, old man Bonzo has reopened the ranch and a new class of clowns have unwittingly signed up. When their die-hard instructor Sgt. Funnybone (Miguel Martinez, The Donor Conspiracy) is found dead in a puddle of cream pie and blood, the curriculum changes from comedy to survival! Edwin slashes, stabs, strangles, and disembowels the clowns while laughing insanely at his own bad jokes.

First off let me say I liked this movie. Second let me add that this movie might not be for everyone. But if you love low-budget horror and cheesy Eighties classics, then this will be right up your alley. It has all of the usual clichés one would expect from a horror movie, but when they poke fun at those clichés they are dead on.

It is 1991, and the movie starts with choppy video footage of Edwin the Clown doing some very unfunny things. Basically butchering all of his fellow students at a clown camp called The Bonzo Ranch. Edwin himself is shooting the footage and the narration that he provides while doing his evil deeds is really well done, not to mention his voice is very creepy. What is scarier is that they never found Edwin. They even have a wanted poster for him, complete with clown face and all.

Cut to fifteen years later and Bozo Ranch is once again opening its doors for a new group of students to learn the art of clowning. Edwin sees this on the television and let’s just say he is not a happy camper (sorry, couldn’t resist). That doesn’t bode well for our new group of students as they arrive at the camp. One very funny scene involves a crazy local doing a spot on imitation of the beloved Crazy Ralph from the Friday the 13th movies as he warns the student clowns of their imminent doom should they venture into the camp.

Fortunately for us the clowns ignore the warning and head on off to Bozo Ranch where they meet the rest of their classmates. And boy what an eccentric bunch they are. You even have a gangsta clown that hails from Detroit and when he tells of the massacre around the campfire well, let’s just say he does it in his own special way. Hilarious.

The next day our clowns go about the business of learning how to make people laugh, including target pie throwing. Little do they know that Edwin has made a return to the camp and it doesn’t take long before he makes his presence known, in one over the top kill after another.

This movie really is fun and the dialogue not too shabby. In one absolutely classic line a clown cries out for somebody to get some aloe as one of his fellow clowns is having his face eaten away by acid. What really makes this movie worth it though is the numerous references to the classic horror movies from the Eighties, especially the ones involving campers. Let’s face it, when you see a sign on an old campground that says it is closed due to a death curse, you can’t help but laugh.

Credit the writers, in this case David Valdez and Philip Gunn, for hitting the mark most of the time. Sure there are some duds in the movie, but that is to be expected when you’re firing jokes off left and right. Not for one instant should you consider this a horror movie, but a horror comedy. Even the kills will bring out some laughs. When the film does shift to a more serious tone it is only for a moment or two. The special effects are not bad at all considering the budget and the acting is slightly above par. Edwin, as the killer clown, is very creepy but it is his voice that really stands out. All around a very nice effort.

I would say try and catch this one, especially with a group of friends. Definitely a rental but I wouldn’t rate it a purchase unless clowns are your thing. Klown Kamp Massacre is a really fun film that delivers the gore while maintaining a tongue in cheek atmosphere. Just remember the next time you run into a clown, you might want to make sure and laugh. After all, you wouldn’t want to hurt his or her feelings. 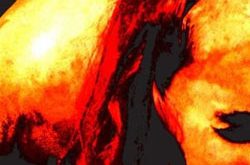 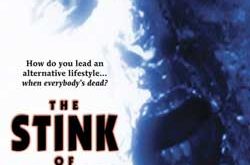