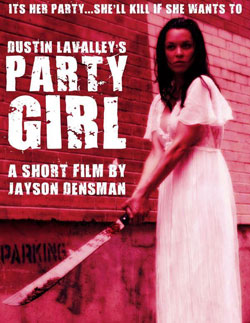 A story of a female serial killer with a Fight Club type twist.

What is worse than a woman scorned you asked? From the looks of it, this latest film short by Dustin Lavelley and directed by Jayson D. Densman. The tale told is very simple and too the point. A jaded girl who happens to pick up a local guy at a bar becomes unwound when this older man turns out to be a rapist. The raper played by Tom Young also does the narration of the piece.

The incident leaves a scar so deep that she takes matters into her own hands by seeking out men of deviant nature and punishing them with violent deaths. Candace Porter plays the party girl who in the short has built up quite a reputation for herself. Assuming she has the personality to find these men, lure them to a room and pretend to offer a good time, she offers them drug laced drinks so she can approach them one by one and murder them in cold blood.

The short is very stylized with a surreal dream quality taking the forefront in the editing suite. Smeared, blurred, time lapsed and colorized with a almost retro kind of colored look…. the film team does an impressive job of creating a short and sweet horror piece. That term sweet is only meant in jest as the film is actually quite violent. Evil John Mays lends an excellent hand to FX work in the culminations of a series of men being killed off in various violent ways all in front of each other. Party girl is a bit of an artist as a simple stabbing won’t do.

She disremembers, impales, castrates, shoots and even defaces her subjects (of course each his own form of death) in pure bloodlust and mayhem. Still the original raper runs free but is always on her mind as she tracks down the worst of the worst to a vigilante solo performance that has the authorities baffled. The short is exacltly that, short, though to put into perspective if you were to take all the kills from a young adult horror film and show them all in 3 minutes, that would be the equivalent of how party girl takes out her victims. Special mention of the camera framing which helps to really draw the mood of the piece. In the behind the scenes it even appears like some of the usual dolly type shots were done hand held.

Party girl is brutally unique providing a quick get in and get out approach to hardcore filmmaking.