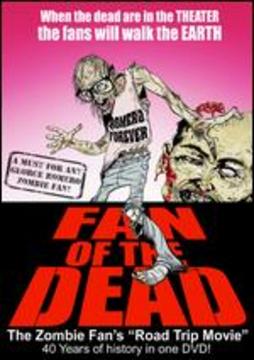 Fan of the Dead is an amazing 52 minutes road-movie documentary revealing the filming locations of Night of the Living Dead (1968 & 1990 remake), Dawn of the Dead (1978) and Day of the Dead (1985), with exclusive interviews with the cast of the George Romero’s trilogy

Fan of the Dead….. I’m sure there are more than a few of us that can relate. If you’ve ever talent tripped or did an out of the way site seeing expedition to get a glimpse of scenes from 1 or more of your favorite films, then you too are a fan of the cinema experience. Ok, maybe not while the film was actually in production but many years later when the dust had settled and you can connect the dots from movie moments shot and shown on screen to that which is left behind in real life.

Fan of the dead was actually shot in 2003, though enjoys a release date of 2008. In fact it is a homage release that has found new life per its Cheezy Flicks Ent re-release. The film is shot hand-held by Nicolas Garreau, who is voice-over-narrated in English. He,  like many of us enjoys his visit by capturing some famous well known areas that George Romero used in some of his horror films. We are shown spots from “CreepShow”, “Dawn of the Dead”, “Day of the DeaD” and “Night of the Living Dead”. Now if you are a purist who is expecting cinema quality here, don’t bother as it’s basically just an edited compilation from Garreau’s trip. Though what this is and perhaps a plus in my view point, is a shared love for the genre and how such simple things such as a basement, a mall, a convention, and a school seem to take on new meaning to visitors when they are extracted from an iconic film or films for that matter. If you don’t like Garreau’s viewpoint, it still serves as a guide for your own visit so you can expedience the original site locations yourself

The film runs 60 minutes and is spoken in French. Though now worries as the voice over gives us a translated version of the filmmakers narration. As I do research it’s apparent this film is also available on youtube, but if you are like me…a DVD is much better to have on hand. What also transpires in the presentation of Fan of the Dead is that we get short and sweet interviews from some of the original actors per way of convention approach. Much older now, these Dawn of the Dead actors find it hard to believe themselves that there small but still memorable appearances are relevant to fans decades later. As one actor puts it…”the film was made before many of the fans were even born, though they still find a fascination with it all. If you’ve never been to the Monroeville mall to do some film to location comparisons, this might just help with the check list of spots you need to pull out your cameras for.

As a keeper, it’s pretty safe to say that “Fan of the Dead” is a one time viewing. There has been better, made documentaries that have come out as part of blu-ray and DVD releases namely the “Document of the Dead”….but hey… it’s nice to take a break from polished works and see a tribute of sorts that resembles something we might put together in our own visits. amateur made, yes….. personal, somewhat charming, yes…. professional no. So depending on what your expectations are, Fan of the Dead, might just provide you with a charged relative visitation that could save you a visit if you don’t feel inclined to fly out yourself.