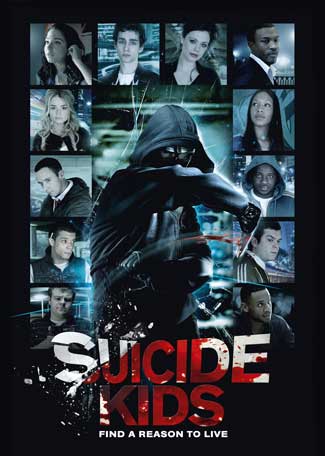 Set against a gritty London backdrop, SUICIDE KIDS is a terrifying urban horror, written and directed by one of the UK’s most exciting new filmmakers, Arjun Rose (Diversity 3-D, Swift). Produced by Golden Globe Nominee Idris Elba, (The Wire, 28 Weeks Later, RocknRolla) SUICIDE KIDS boasts an impressive ensemble cast that brings together the freshest stars of the latest generation of British acting talent.

When Amba (N*Dubs star Tulisa Contostavlos) takes her own life, Archie Eden (Robert Sheehan – Misfits, Cherrybomb) and seven other depressed London teenagers decide to follow her lead and create a suicide pact. As the group begins to die one by one, Archie realises they have all become the target of a masked killer and that his own commitment to death has become a terrifying fight for survival and a battle to protect the girl he loves, but who is the killer?