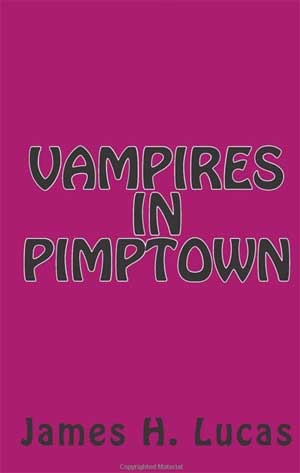 James H. Lucas is a funny guy. The first novel of his I read (An Undead Wedding) managed to poke fun at nearly everything you could think of about weddings and, well, the undead. Really everything between, as well. I chuckled out loud when I opened my mail and had the bright pink cover of Vampires in Pimptown staring back at me. Once I got home and dug into it I chuckled to the very last page of hilarious Vampire vs. Pimp warfare.

Mr. Lucas takes us on a quick tour of the city in America with the highest population of prostitutes Plimpton, or as it is better known to everyone “Pimptown.” We meet Doctor Bigg (the classy old school pimp that gets respect from the street and the law), Spaceman (the silver clad pimp that names his girls after constellations and possesses one mean strut), Fried Gold (the five foot six pimp with eight feet of attitude and an fu-man-chu), and Vanilla Luuv (the white boy that wants so badly to be a real damn pimp). James H. Lucas takes time to develop his characters as he moves forward without ever skimping on the humor. He introduces a wide and comical cast of supporting characters such as Sourkreem and Chives, two of Pimptown’s less than noble police force.

After introducing us to the pimps and police Mr. Lucas introduces us the vampires that descend upon the sin and sex filled city. The patriarch of the vampire clan is the ancient and powerful Amon. Two wickedly attractive female vampires, Portia (with a taste for youthful blood) and Jade (hyper violent and man hating), wreak as much havoc as the near unstoppable Amon. The last member of the nefarious clan is the Mormon vampire teenager Tristan. Now, when talking about Tristan I can bring up another point. Even with a character that sounds hilarious in nature (and for the record is) Lucas digs deeper and breathes real life into them. Tristan goes through an internal struggle between his beliefs and his undying unnatural hunger. Well placed back stories that tend to be slightly more serious dot the novel and give you more personal glimpses of the stars. Each of the characters evolve well through the violence all while still making you laugh out loud.

The vampires sink their teeth into the town’s life blood (by that I mean pimps, hos, and johns). No one in purple fur coats or knee high boots is safe. Doctor Bigg spots a suspicious Tristan and puts two and two together. He bands the sometimes respectful, sometimes hostile pimps together after a massacre at the town’s most upscale brothel, Bianca’s Place. The vampires slaughter any one in their way with ruthless abandon yet Mr. Lucas never lets up with some form of humor. Running jokes, hilarious social commentary, snappy one-liners, glorious puns, and a fun smart assed narrative abound the entire novel through.

We learn the “family” of vampires has bigger plans than a massive horny buffet of street walkers and lonely math teachers and it includes dipping into the pimp’s profits; something no pimp takes kindly to. Vanilla Luuv’s number one girl (not to mention only one), Crystal, knows more vampire lore than any of the other pimps or prostitutes and her knowledge and sassy attitude earns her respect from the assortment of pimps as Lucas builds to the climax. Well written action scenes splatter blood through massacre after massacre until the pimps fight back. Chaos ensues; gory, smart, and hilarious chaos.

I walked away from Vampires in Pimptown with a smile on my face. As a fan of An Undead Wedding I can honestly say James H. Lucas topped himself with Vampires in Pimptown. A good meaty story with chuckles and blood a plenty. Highly recommended for fans that can’t get enough of mixing smart humor and brutal traditional horror. 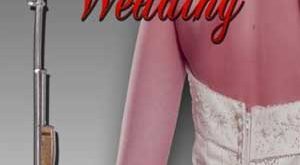