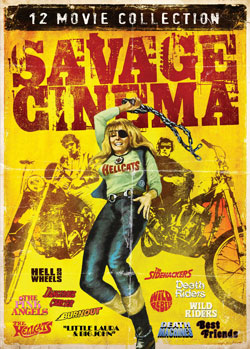 a Ride on the Wild Side! – Chicks, choppers and chumps rule the road in these 12 drive-in favorites!

Embark on a dangerous and deadly journey with these twelve exploitative films from the drive-in era of the 60s and 70s. These adrenaline-pumping action flicks feature the most brutal bikers, the most wretched rebels and the hardest-hitting action scenes! It’s the craziest collection of cult cinema classics!

4. Wild Riders (1971) Color / R / 91 min
What starts out as an evening with a pair of bad boy bikers turns into several days of torment for a pair of unsuspecting women in this suspense-filled thriller.
Starring: Alex Rocco, Elizabeth Knowles, Sherry Bain

5. The Pink Angels (1971) Color / R / 81 min
Six rugged motorcyclists gather on the side of the highway to plan an excursion to Los Angeles. Although they appear to be the burliest bunch of bikers this side of the Hell’s Angels, they are actually crossdressing madmen with an affinity for lipstick, high heels and braziers!
Starring: Dan Haggerty, John Alderman

6. Burnout (1979) Color / R / 90 min
A troubled teenager, whose sole desire is to become a great drag racer, almost ruins his own dreams when he spurns his dad’s racing advice. But support from his girlfriend enables him to prove his abilities to the racing world, his father and himself.
Starring: Mark Schneider, Robert Louden

7. Death Riders (1965) Color / PG / 86 min
This documentary video looks at the daring exploits of the “Death Riders”, the daredevils from this traveling thrill show and their dangerous stunts on motorcycles and in automobiles.
Starring: The ‘Death Riders’ Stunt Drivers

8. The Side Hackers (1969) Color / PG / 82 min
A thrilling, suspenseful story about the exciting sport of Sidehacking and the gutsy, dangerous rides the racers of the three-wheel vehicles take to impress their women and themselves!
Starring: Ross Hagen, Diane McBain, Hoke Howell

Savage Cinema:…Retro and grind house all in one, whether you like one of the films or like them all, I really cant stress enough the value in these packs. The collection and films are spread out at 2 per side of DVD’s (4 to a DVD) so your not suffering in quality or compression. What was more of value to me was the fact that these films are hard to find period as individuals so a collection is a bonus. 12 films to be exact which are best listed in the provided summary up above. 17 Hours total books you just fine for 2-3 straight days of 60’s and 70’s exploitation action.

I couldn’t fit all of these into my review as time is of the essence…but I can tell ya that Saturday afternoons will be chock full of grind housing for a few days. Quality of the films themselves are digitized appropriately though still retain alot of that scratchy film look that was a mainstay as the film reels traveled town to town …cinema to cinema.

You were likely to find these as double or triple bill acts playing in such famous locations as 42nd street in New York. The term exploitation was based mainly on the way they were advertised but as years progressed it also seemed to take on the moniker of the sex, violence and action that was common to these. Alot of the traits that you’d find in the exploitation horror films though without the horror genre staple.

These films are also a chance to catch some of the earlier performances of big name actors such as Karen Black, Richard Hatch & Marty Robbins. Young, alluring and still in there prime the performance themselves may outweigh the actual storylines as films to list on your favorite cinematic moments chart. Be sure to get your fix on this collection that brings all that great motor bike gang, gangster and hot women style films under one blanket.