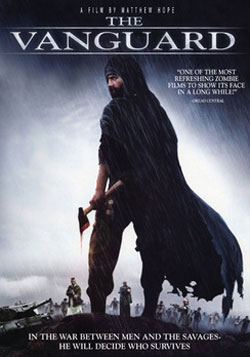 Set in the year 2015, this apocalyptic thriller finds rebels Max (Ray Bullock Jr.), Rachael (Emma Choy) and Zac (Steve Weston) caught in the midst of a raging war between the Biosyns — a race of primitive people engineered by scientists — and the all-powerful Corporation. With civilization on the verge of extinction, due to oil depletion, the trio sets out on a dangerous journey to locate and join a growing resistance movement.

Cast into the future, the times are now populated in a zombie-transformed state, where most of the living humans have become mindless aggressive beings who are not much more than savages. This new altered reality is under the power of the all powerful “Corporation” (the leading force in the world now) who after trying to control the population infected it with a altering dosage. Instead of helping the situation it produced side effects creating a rampaging mindless race without human characteristics.

Max, a deaf rebel who has managed to stay under the radar, fights for his life daily as he slaughters these transformed humans with pretty effective grace. “Biosys” are humans who have been altered and engineered by scientists to soldier where designated. One of the biossys strays away from his team after realizing the influence that was inflicted upon him only to question his being and his place in this world. He seeks out Max who he believes contains the blood to antidotize the serum and cure the savage race. Along the way they also team up with 2 others who are lost as they are. Their mission is to all find this force known as the Resistance.

Some of the zombie kills are beautifully executed as Max takes them out with the slice of his handy set of axes. The savages move fast and defy gravity as they leap like animals in search of others and those who cross there path. Other than these great scenes, The Vanguard is a pretty dull film set mostly in grassy plains and forest land. A few cross fires exchange between biosysys and the others though we never make it past these forest lands to any kind of resolution. I kind of felt like this was a overly long part 1 to a 2 part film with no 2nd part. Max spends most of his time like Robinson Caruso leaping among the trees like a gazelle. The story winds down in zombie kills while Max begins to realize his place among this new race. The brunt of this film is pretty laced with numbing drama that wears pretty fast and even faster on your patience.

In one review I had read “The Vanguard” was described as one of the best zombie flicks of the year. Don’t believe it, and I’m not sure why that statement was even issued. No real zombie fan will get much satisfaction from this droll of a movie. Technically they are not even zombies they are infected humans. Alot of the dialog is based on a believable reality that we never really get to see. If a “Corporation “exists, the viewer is never given the chance to see it for them self. It’s all based on having blind faith in the story-telling which just doesnt pull you in. I’m gonna give this one a Horrornews.net eject and call it a day.